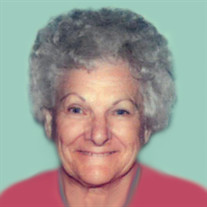 Ann Akers, age 99, went home to be with the Lord on December 20, 2019. Ann was born in Kulpmont, PA. on August 7, 1920. She was a caring, classy lady of her time who had a passion of living life to the fullest and always put others before herself. During World War II, Ann would write notes of encouragement to the front-line soldiers. For one particular soldier notes of encouragement turned into love notes. Upon return from war, Ann and Sherman Akers married and established residence in Akron, Ohio. Together they raised four sons and enjoyed the fruits of their labor and life as a wonderful family. Ann was a devoted Christian and a member of St. Matthew’s Parish. Ann was inducted in the 1956 class of the Mogadore Moose holding a lifetime membership. She volunteered for 15 plus years, including 5,500 hours at Edwin Shaw Hospital. Ann enjoyed crocheting, playing euchre, gardening, watching cardinals in her bird bath, fishing Lake Erie with her boys, and volunteering her time to St. Matthews as well as The Moose. Ann loved to cook, especially her famous spaghetti dinners for her family. The thing that meant most to her was cherishing and enjoying time with her family and friends. Preceded in death by her husband, Sherman who passed in 1979; her son, Bruce who passed in 2015; parents, and all siblings. Ann is survived by her three sons and four daughters-in-law, Wyatt (Sherry), Mark (Tina), Kevin (Judy), and Bruce’s widow Karen. Ann’s grandchildren, DeAnna, Edwin (Sonja), Denise Larson (Brian), Doug (Lindsay), Matt (Boni), Steve Lisek (Tabetha), Chris Lisek (Jen), Scott Dietz and Brian Dietz. Ann’s great-grandchildren, Ed Jr., Sherman, Victoria, Madison, Avery, Everly, Brian Larson Jr., Nicole Larson, Mandi Larson, Jake Dietz, Hunter Lisek, Caleb Lisek, Spencer Lisek, Matthew Lisek, and Bryan Lisek. Ann’s great-great-grandchildren, Austin and Jonathan Larson. The Akers Family would like to thank the Nursing Staff at Green Village for their care and support. Friends and family will be received Thursday, from 5 to 8 p.m., and on Friday, one hour prior to the service, from 9:30 to 10:30 a.m., at Hopkins Lawver Funeral Home, 547 Canton Road (Route 91), Akron (Ellet), Ohio 44312. Funeral service will be held Friday, 10:30 a.m., at the funeral home. Burial will follow at Hillside Memorial Park. The family suggests memorials to Wounded Warrior Project. (Hopkins Lawver, AKRON, 330-733-6271) www.hopkinslawver.com

Ann Akers, age 99, went home to be with the Lord on December 20, 2019. Ann was born in Kulpmont, PA. on August 7, 1920. She was a caring, classy lady of her time who had a passion of living life to the fullest and always put others before herself.... View Obituary & Service Information

The family of Ann Akers created this Life Tributes page to make it easy to share your memories.

Send flowers to the Akers family.