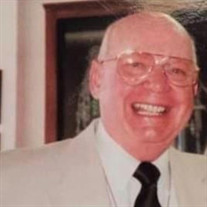 Rev. Earl Robert (Bob) Sullivan, 88, passed away on March 21, 2021. Bob was born on September 24, 1932, in Youngstown, OH, to Clara Luella Marsden (nee Parker and Sullivan) and Howard Sullivan. Bob attended Ellet High School in Akron, OH. He was married to Jean Wells on August 13, 1949, and together they raised three children, Donna (Albert) Eshbaugh (Akron); Deborah (Robert) Davis (Naples, FL); and Robert (Carrie) Sullivan (Mogadore). Throughout Bob’s life, he was a resident of Youngstown, Akron, Tallmadge, Pinellas Park, FL, and Largo, FL. Bob was a very kind man and a loving husband, father, grandfather, great-grandfather, pastor and friend. Bob was the Pastor at Gospel Crusaders Church in Akron, prior to his retirement in 2005. A few years after retirement, Bob and Jean relocated to Pinellas Park, FL, where they both resided until Jean’s death in 2010. In 2011, Bob married Carolyn Wilder. Bob worked very hard throughout his life, which is how he approached all things in life - giving his best effort, particularly in service to God. What the family remembers most is the many wonderful vacations and holidays spent together, full of laughter, love, and good times. Bob was a self-taught Biblical scholar who was loved and respected by many. Bob’s sense of humor was one of his best personal features. He could tell a joke like none other. His beautiful singing voice also will be remembered. No doubt it will be shared singing in Heaven. Bob was preceded in death by his loving wife, Jean, with whom he was married for over 60 years; by his loving wife, Carolyn, with whom he was married for over 9 years; by his parents; by his sister, Pearl Nees; by his daughter, Donna; and by his grandson, Jamie Sullivan. Bob leaves behind two of his three children, Deborah and Robert, and his many grandchildren and great-grandchildren resulting from his marriage to Jean. Bob will also be missed by his five step-children (Dan Wilder, Becki Mays, Dave Wilder, Rachel Haskins and Mary Lane) and his many step-grandchildren, step-great-grandchildren, and step- great-great grandchildren whom he came to know and love as a result of his marriage to Carolyn. Bob was also blessed with numerous cousins, nieces and nephews. There will be calling hours on Friday, March 26, between 5:00 pm and 9:00 pm at the Hopkins Lawver Funeral Home, 547 Canton Road (Route 91), Akron (Ellet), Ohio 44312. A funeral service will be held on Saturday, March 27 at 11 am at Hopkins Lawver, followed by a committal service at Hillside Memorial. A memorial service will be held for the benefit of Bob’s Florida family and friends in Clearwater, FL on Saturday, April 10, at 11 am at the Clearwater First Nazarene Church. In lieu of flowers, if you would like to make a charitable contribution in Bob’s memory, please contribute to Gideon Bibles (and mention Bob’s name) in order to supply Bibles to the world. Gideon’s web address is https://www.gideons.org/donate.

The family of Rev. Earl Robert Sullivan created this Life Tributes page to make it easy to share your memories.

Send flowers to the Sullivan family.