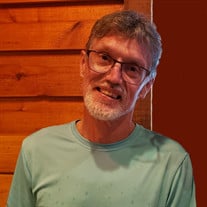 At 5:05 a.m. Thursday, September 2, 2021, we lost a wonderful man, Gary E. Lancaster. He was born in Cuyahoga Falls to his wonderful parents, Charles E. and Alverda (Pyle) Lancaster. He grew up in Springfield Township, the middle son of three children. As a child, Gary loved being outdoors, whether it be riding bikes or climbing and eating fruit off the neighborhood trees. He would leave as early as he could and would stay out as long as possible, alone and with friends. He was involved in auto mechanics as a junior and senior at Springfield High School and graduated with a two year associates degree in automotive technology from University of Northwestern Ohio. Gary lived the past thirty years at his home in Ellet. He worked as a mechanic in and around the area for 25 years. He married the luckiest lady around, Lisa Jo on May 6th, 2000. In 2006, he began a career with commercial and industrial equipment, including moon buggies. Gary had a love of automobiles his entire life, especially Mopars through the 60s and 70s. He enjoyed going to auto shows around Ohio and surrounding states. A favorite pastime of his was National Trails in Grandville, OH and spending the weekend nights on Bryce Road watching cars cruise up and down. Gary also enjoyed swimming and wading in water, even during his lunch breaks as he travelled around Ohio and neighboring states. Gary was kind and gentle. He was known for loving everyone he met. His love of God and Jesus Christ became a center of his life in his early 30s. He found a home at the Northwest Avenue Church of Christ in Tallmadge, where he became a Deacon. He loved adult Sunday school, worship, and huddles after services. He had a passion for service, which was seen through his valet work and helping with social gatherings at the Family Life Center. He also offered free small repair and automobile upkeep at the church for several years. Gary was preceded in death by his grandmother, Mammie Pyle; parents, Charles and Alverda; aunts, Kathleen (Orey), Nancy Jo, and Hilda; and uncle, Richard. Blessed to keep his memory alive is his wife of 21 years, Lisa (Butler) Lancaster; three daughters, Sarah (Tim May) Hambel, Gabbi (Karac) Rooney, and Brandi (Kyle Christensen) Butler; grandchildren, Karac II “Kody” (Emily) Rooney of El Paso, Kellsey and Kaden Hambel of Akron, OH, and Dom (Emily) Lawson, Alexandria “Alex” Rooney, Zacky Butler, Fenix and Rylee Christensen, all of Lawton, OK; brother, Terry (Linda) Lancaster of Kent; sister, Stacie (Bret) Pendergast of Mogadore; uncles Cecil (Ann) and John Allen Pyle; aunt Peggy; Lancaster cousins, Cheryl, Jenni, Theresa, Tana, Mike, Rick, Regatta, Reva, Nancy, and Cookie; adopted in love family members, Megan, Griffin, Autumn, Sylvia, Bobby, Walt, Jenny, Anna, Haylee, Bryan, Essence, and Joey; and many more loving cousins and family members. In lieu of flowers, donations can be made to Northwest Avenue Church of Christ, 737 Northwest Avenue, Tallmadge, OH 44278. Please specify to his passions of youth or missions, whichever moves your spirit. Family and friends will be received Thursday, September 9th from 4 to 8 p.m. at Donovan Funeral Home, 34 S. Cleveland Avenue (Route 532), Mogadore, Ohio 44260, in care of Hopkins Lawver Funeral Home. Funeral service will take place Friday, September 10th, at 1 p.m. at Northwest Avenue Church of Christ, 737 Northwest Avenue, Tallmadge, Ohio 44278. Calling hours before the service will be held from 11 to 1 p.m. Burial will follow at Greenwood Cemetery in Mogadore.

At 5:05 a.m. Thursday, September 2, 2021, we lost a wonderful man, Gary E. Lancaster. He was born in Cuyahoga Falls to his wonderful parents, Charles E. and Alverda (Pyle) Lancaster. He grew up in Springfield Township, the middle son of three... View Obituary & Service Information

The family of Gary E. Lancaster created this Life Tributes page to make it easy to share your memories.

Send flowers to the Lancaster family.