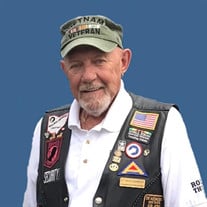 George H. “Bud” Clement. 1945-2021 Bud Clement, aka Dad, Poppa, Gramps, Grandpa, and Chuts, entered the kingdom of his Heavenly Father unexpectedly on August 30, 2021 at the age of 75. He was born in Akron, Ohio on November 13, 1945 to George Clement and Edith Ray. Bud lived in Barberton and attended Barberton High School. Being a man of strong beliefs, he was inspired by the words of the late President John F. Kennedy; “Ask not what your country can do for you, ask what you can do for your country.” Wanting to fulfill his civic duty, he served in Vietnam from 1966 to 1967. Bud’s dedication to hard work eventually led him and Carolyn to move to California to raise their family and to follow his dream of creating and building his own business; which he owned until he retired. At that time they moved back to Akron. Bud was a man of great compassion and strong convictions. He lived with empathy for his fellow veterans, especially those from WWII and the Korean War. His drive for helping those that served led him to join Rolling Thunder Chapter 2 Ohio. His dedication and his heart to serve his fellow veterans could not be measured as he eventually became President of his Chapter. Bud owned a Harley Trike and on any nice day, with Carolyn always with him, he would love to take long rides with their many close friends. He always enjoyed spending time with his family, especially his grandchildren. Above all else, he cherished God, country, and family. Bud is preceded in death by his parents, George Clement and Edith Ray; sister, Connie Mitchen; uncles, Dick and Kenny Croasmun; father-in-law, Larry Terango; stepfather-in-law, Joseph Thrash; and his beloved grandmother, Louis “Nana” Oaks. He has also joined many special friends. He is survived by his loving wife of 46 years, Carolyn; sons, Tony (Michelle), Jeff, and Greg; daughter, Shawna; and daughters-in-law, Erin and Mayra. Also surviving him are his grandchildren, Ashley, Steven, Royce, Ryan, Jeffrey, Anthony, Christopher, Rez, and Jason; along with three great-grandchildren, Oliver, Lucy, and Eloise; sisters Diana (Les) Reimer and Debbie (Tim) Oaks; mother-in-law, Ella Thrash; sister-in-law, Debbie (Gary) Cutright; many nieces, nephews, great-nieces, and great-nephews; special nephews, Sean (Melissa), Christopher (Christina), and Cody (Sarah) Cutright; special friends and the “Cool Crew”; and last but not least, his best friend and constant companion, Brando. He will be missed by all who knew and loved him. Friends and family will be welcomed at Hopkins Lawver Funeral Home at 547 Canton Rd. Akron, Ohio 44312 on Thursday, September 9, 2021 from 4:00 PM to 7:00 PM. Services will begin at 7:00 PM. Interment will be held at Ohio Western Reserve National Cemetery at 10175 Rawiga Rd, Seville, OH 44273 on Monday, September 13, 2021 at 10:15 AM. In lieu of flowers donations can be made to Rolling Thunder Chapter 2, P.O. Box 485 Lakemore, Ohio 44250.

The family of George "Bud" H. Clement created this Life Tributes page to make it easy to share your memories.

Send flowers to the Clement family.