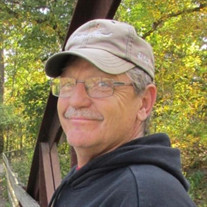 George Brenton Reed went home to be with the Lord on January 3rd, 2022 at the age of 68. He was born in Akron and called Akron home for most of his life, but he lived a life full of adventure. He graduated from Springfield High School and went on to serve his country in the US Navy. It was while in the Navy that he fell in love with Italy. He absolutely loved to talk about his adventures in Italy and promised to one day take his wife there, which he did in spectacular fashion in 2014. George earned his Water Treatment Operator license and worked for the City of Akron Water Department for 24 years before he retired. George’s favorite place to be was outside. He loved to mow the grass and boasted of the blazing speed of his new zero turn lawn mower. If you ever went over to visit him, you weren’t leaving without him trying to get you to take it for a spin. He loved to grow fresh vegetables, bird watch, take pictures, fish, and bike ride on the tow path. He loved to blare good music and grill out hamburgers for his family and friends. He loved to play with his grandchildren and introduce them to new things, specifically very berry pie piled high with whipped cream and the sounds of the harmonica. He loved to leave outrageous tips when he went out to dinner. He loved to make people’s day. George will be remembered most for his fabulous storytelling, off the wall, mostly inappropriate sense of humor, and his kind and generous heart. Wherever George was there was sure to be laughter. George fiercely loved his family and friends. He always put the needs of others before his own and was always looking for ways to spread joy. One of George’s greatest accomplishments was being the world’s best dad. Some of his shining moments include administering CPR to a pet hamster, pretending to win big on a lottery ticket to then accidentally drop it in the campfire, allowing the old let’s see what happens if we put this m1000 in this tiny plywood house experiment, giving free reign in the Discount Drug Mart candy isle to ensure enough snacks to last through the Friday night pile of Block Buster videos, and a lifetime of setting an example of what it means to work hard and love your family. He shared a simple piece of advice that his dad shared with him. START. This advice will echo in our hearts as we carry on without him. George was preceded in death by his loving wife Judy Reed, mother and father Marcia and James Reed, sisters Peggy Reed, Marcia Kennedy, and Janet Grant. His brother Paul Reed followed him in death passing away three days after George. George will be missed beyond words by his two children; Nathan Reed and Holly Hartman (Reed); Son In Law Brandon Hartman; three grandchildren, Eric Brenner, Lucas Hartman, and Norah Hartman; three siblings; Madeline Moreaux, Janie Heisa (Mark), Jim Reed; girlfriend Barb Angerstein, and several close friends. The family will be holding a celebration of George’s life at a later date.

George Brenton Reed went home to be with the Lord on January 3rd, 2022 at the age of 68. He was born in Akron and called Akron home for most of his life, but he lived a life full of adventure. He graduated from Springfield High School and went... View Obituary & Service Information

The family of George B. Reed created this Life Tributes page to make it easy to share your memories.

George Brenton Reed went home to be with the Lord on January...

Send flowers to the Reed family.