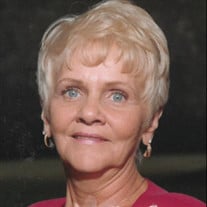 Janet Marie (Smith) Venarge, whose age nor height shall be discussed, passed away peacefully Thursday, February 3, 2022. She is reunited with her two infant daughters, Mary and baby Venarge; parents, Charles and Ethel Smith; brother, Charles L.; and grandmother, Claire McVan. Survivors include her children; Jeff, Suzy, and Tom (Marcy); grandchildren, Sydney, Cami, and Alayna; brother, John G. (Vivian) Smith; sister, Margaret Bilandzia; sister-in-law, Carol Smith; many nieces, nephews, cousins, friends, neighbors, and other children she considered her own. Janet became “Mom” shortly after graduating from St. Mary’s High School and becoming a licensed Beautician; but was better known as “Nana” for the last 20 years. It was the role she cherished more than anything. Unconditional love was her specialty, and she was a fierce defender of her babies. We were her Pride and Joy. Nana had a heart of pure gold, and the most beautiful blue eyes God ever created. She was kind, friendly, funny…and always a little off. She also LOVED to dance! We understand why our friends liked her more than us. Instead of sending flowers to the funeral home, send some to YOUR mother. Call your family, tell them you love them. Be kind to one another. Smile and wave. Share fond memories. Laugh. Onside kick it to start the game. That’s what Nana would do. As it turns out, a ‘Glass Box in the Backyard’ wasn’t a great option, so cremation has taken place. Friends and family will be received Wednesday, February 16th, from 4 to 6 p.m. at the Hopkins Lawver UNIONTOWN Funeral Home, 3553 Northdale Street NW (one block NW of the square of 619 & Cleveland Avenue), Uniontown, Ohio 44685. A funeral service will be held immediately after at 6 p.m.

The family of Janet Marie (Smith) Venarge created this Life Tributes page to make it easy to share your memories.

Janet Marie (Smith) Venarge, whose age nor height shall be discussed,...

Send flowers to the Venarge family.