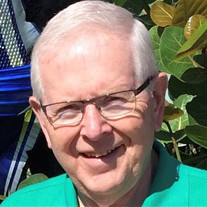 Jerry Hershman, born March 3, 1940 was called by his Lord to his heavenly home on October 10, 2019. He was the son of the late Okey A. and Neva (Upton) Hershman. On June 27, 1965 he married the love of his life, Janet (Jan) Linger who preceded him to Heaven on June 21, 2018. Surviving is a son, Wesley (Meghan) of Cuyahoga Falls, Ohio; a daughter, Sarah King (Brandon) of Atlanta, Georgia; granddaughters, Brooklyn King and Falyn King; grandson, Lochlyn King; a sister, Connie (George, deceased) Seli of Akron, Ohio and several cousins, nieces and nephews. Jerry graduated from Philippi High School, attended West Virginia University and earned a Bachelor of Science Degree in Secondary Education from Alderson Broaddus College. He participated in graduate studies at San Jose State College and earned a Master of Science in Curriculum and Instruction from The University of Akron. Jerry’s calling was in teaching. He taught Mathematics and Science for 32 years in the Akron Public Schools, while also teaching mathematics part time for 10 years at The University of Akron. He then served as the Academic Dean of Cuyahoga Valley Christian Academy for 16 years and retired in 2010. Jerry enjoyed studying Scripture and taught adult Sunday school classes at Cuyahoga Falls Baptist Church and at the Chapel in Akron. Jerry was recognized for excellence in teaching as a Martha Holden Jennings scholar at Kent State University, a National Science Foundation scholar at San Jose State College and Building Teacher of the Year at Kenmore High School. Jerry enjoyed gardening, reading, traveling, visiting Amish Country, baking and volunteering at The Haven of Rest but most of all spending time with his family. At Jerry’s request, there will be no calling hours. His body will be laid to rest at Mount Vernon Memorial Cemetery in Philippi, WV. Jerry asks that if you would like to make a remembrance please do so to The Haven of Rest at 175 E. Market Street Akron, Ohio 44308 or The Hershman Family Scholarship at Cuyahoga Valley Christian Academy, 4687 Wyoga Lake Road, Cuyahoga Falls 44224. (Hopkins Lawver, 330-733-6271) www.hopkinslawver.com

The family of Jerry Hershman created this Life Tributes page to make it easy to share your memories.

Send flowers to the Hershman family.