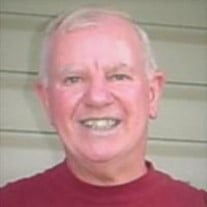 John William Vargo, 86, went home to be with the Lord on January 16th, 2022 and was reunited with his wife Judy. He was born on March 16, 1935, in Akron, Ohio to Joseph and Helen (Doxey) Vargo. John graduated from Garfield High School, where he was a high school state qualifier in cross country. He then enlisted in the United States Air Force and served in South Korea. In 1962, John married the love of his life, Judy Hawk Vargo. They were happily married for 25 years, until Judy passed away in 1987. He worked at Bridgestone/Firestone Computer Center for 30 years and was a member of the Akron Baptist Temple. John was preceded in death by his wife, Judy Vargo; parents, Joseph and Helen Vargo; mother and father-in-law, Howard and Hazel Hawk; brother, Joe (Joanie) Vargo; sister, Mary (Ray) Henley; sister-in-law, Joan Vargo; brother-in-law’s, Jack Coulter and Richard Hawk; and niece, Evie Marie Henley. John is survived by his son, James Vargo; daughters, Linda (Steve) Hennis and Lori (Guy) Hoxworth; grandchildren, Steven, Spencer, Jake, and Josh Hennis, and Brandon, Tyler, and Madison Hoxworth. In addition, he is survived by brother, George Vargo; sister, Evelyn Coulter; brother-in-law’s, Gary (Cathi) Hawk and Dave (Debbie) Hawk; sister-in-law, Alice Hawk; “adopted son” Rick (Vicki) Brake; and many nieces and nephews. John was always kind and generous and saw the best in everyone. He had a silly sense of humor and contagious laugh. He was very smart and loved to tinker and fix things. In addition to being a wonderful father, he was an even more awesome, proud Papa who spoiled his seven grandchildren endlessly. He loved attending all their sporting events, choir concerts, and dance recitals, then taking them out afterwards for ice cream or fast food. Nothing was more fun than going to Papa’s house for the holidays. He made special, lasting memories for everyone. There will be no services, per John’s wishes. Well done good and faithful servant! May your shining example of love, kindness, silliness, and generosity live on in your grandchildren and future generations!

John William Vargo, 86, went home to be with the Lord on January 16th, 2022 and was reunited with his wife Judy. He was born on March 16, 1935, in Akron, Ohio to Joseph and Helen (Doxey) Vargo. John graduated from Garfield High School, where... View Obituary & Service Information

The family of John W. Vargo created this Life Tributes page to make it easy to share your memories.

John William Vargo, 86, went home to be with the Lord on January...

Send flowers to the Vargo family.