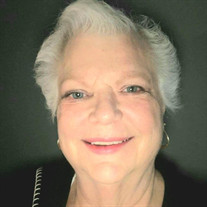 Leslie Denise Everett Borrieci, Age 67, resident of Canton, Ohio, formerly longtime resident of Harrisburg and Dublin, Ohio passed away on Sunday, August 29, 2021, in Akron, Ohio. She was born September 10, 1953, in Columbus Ohio. Leslie was the daughter of the late James Thomas Everett and Virginia Kunz Everett. She graduated in the first graduating class from Westland High School in 1971; and from Otterbein University 1975 after spending her junior year abroad at Heidelberg University in Germany. She is survived by: son, James Everett (Theresa) Borrieci; granddaughters, Gemma Rose Borrieci and Emerald James Nicole Borrieci of Canton, Ohio; sister and brother-in-law, Linda (Craig) Hayden of Milford, Ohio; aunts, Joan Kunz Fowler of Snellville, Georgia and Marilyn Kunz Wade of Grove City, Ohio; and cousins, Debbie Wade (Jerry) Ball, Lori Wade, Susan Fowler (Paul) Graham and Jeanne Fowler (John) Gardner. Leslie worked as credit manager for wholesale food companies; first for Abbott Foods in Columbus and later for Sysco Foods in Columbus and Pittsburgh. After retiring in 2019, she moved to the Akron area to be close to her son and family, following a cancer diagnosis. She had a variety of interests, especially crafting, traveling, and during COVID developed a skill with sourdough. The family wishes to thank the staff at Regency Care Copley who supported many of her healthcare needs and, of course, her numerous family and friends. A memorial service will be held on Tuesday, September 7, 2021 from 4pm to 7 pm at 547 Canton Rd. Akron, Ohio 44319. Arrangements to be handled by Hopkins Lawver Funeral Home. Cremains will be interred at the Galloway Cemetery, Galloway, Ohio with a graveside service held at a later date.

The family of Leslie D. Borrieci created this Life Tributes page to make it easy to share your memories.

Send flowers to the Borrieci family.