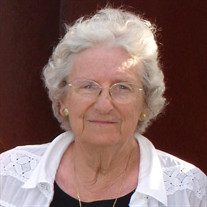 Marilyn Low Porter, 97, of Canal Fulton, died peacefully Sunday, September 26, 2021, at the Chapel Hill Retirement Community. As the daughter of Frederick L. Low and Elsie M. Low, Marilyn grew up in Ridgewood, New Jersey and graduated from Ridgewood High School in 1942. Marilyn later moved to Pearl River, New York, where she met her husband of 53 years, John. They later lived in Ramsey, New Jersey, where they raised a family, before retiring to Pisgah Forest, North Carolina. Marilyn was a vibrant woman who enjoyed riding horses into her eighties and playing spirited games of Yahtzee and Spite and Malice, during the golden hours of the evening. She was a member of St. Philip’s Episcopal Church in Brevard, N.C., for whom she knitted scarves to send to the seaman, even after moving to Chapel Hill. Her family will fondly remember Marilyn quietly whistling off-key on snowy, family filled Christmas mornings, and making rainy day blanket forts with her grandchildren. Marilyn is preceded in death by her husband, Dr. John N. Porter; sister, Audrey Proctor; and daughters Cheryl Lynn Eyles and Dr. Mary Allen Porter. She is survived by her son, Dr. John (Dr. Kathy) Porter and daughter, Susan (Michael) Pearch; grandchildren Jonathan Eyles, Ashley (Jimmy) McGhee, Lauren Pearch, Alexander Porter, and Lisa Porter; great-granddaughter Kathryn McGhee. Marilyn was an avid animal lover and would tell harrowing stories of her cat, Martini, and beloved service dog, Abbey. Because of this love, the family requests that any memorials be made to One of a Kind Pet Rescue in Akron, Ohio. Her surviving family will gather in Pisgah Forest, North Carolina next year to celebrate her life.

The family of Marilyn L. Porter created this Life Tributes page to make it easy to share your memories.

Send flowers to the Porter family.