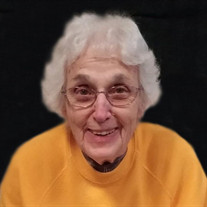 Patricia L. Von Maluski (nee Beard), 84, passed away peacefully on June 4, 2019 at the Gardens of Cuyahoga Falls, where she resided since 2017. She was preceded in death by her parents, her brother, and her husband, Eugene “Gene” Von Maluski. She is survived by her siblings, Barb (Sam) Burnett, Jerry Beard; and sister-in-law, Madonna Beard. Her legacy includes eight children, Kay (Bill) Bailey, Don (Vickie) Hatfield, Frank (Barbara) Von Maluski, Jean (Bob) Durbin, Terri (Mike) Wallis, Larry (Becky) Von Maluski, Tracy (Albert) Von Maluski and Glen (Terri) Von Maluski, 17 grandchildren; 19 great grandchildren; and four great-great grandchildren. Pat was born in Grand Rapids, Ohio and lived most of her life in Ohio. In 1997 she retired from Terra Technical College in Fremont, Ohio. She and Gene moved to the Akron area to live with daughter Terri’s family. They became a sandwich generation family, sharing caregiver responsibilities for the grandchildren and for Gene, who battled Parkinson’s disease. Pat and Gene were active with the Summit County Parkinson’s Support group, where Pat served several years as president of the group even after Gene’s death in 2006. Pat was a long time member of Trinity Church of the Nazarene in Uniontown. Pat’s favorite pastime was spending time with family and friends. Her servant heart and giving spirit will be missed by all who knew and loved her. The family would like to give special thanks to the staff and caregivers of the Gardens of Cuyahoga Falls and the Gardens of Western Reserve Hospice Care. Thursday, June 6, 2019, a visitation will be held from 5 to 6 p.m. at the Trinity Church of the Nazarene, 2780 Canton Road, Uniontown, OH 44685. A celebration of Pat’s life will follow at 6 p.m. with Dr. Wayne Evans officiating. In lieu of flowers, the family asks that donations be made to Alzheimer’s Association, 70 W. Streetsboro Street, Suite 201, Hudson, OH 44236; or the Gardens of Western Reserve Hospice Care, 3792 State Road, Cuyahoga Falls, OH 44223. (Hopkins Lawver, AKRON, 330-733-6271) www.hopkinslawver.com

Patricia L. Von Maluski (nee Beard), 84, passed away peacefully on June 4, 2019 at the Gardens of Cuyahoga Falls, where she resided since 2017. She was preceded in death by her parents, her brother, and her husband, Eugene &#8220;Gene&#8221;... View Obituary & Service Information

The family of Patricia L. Von Maluski (nee Beard) created this Life Tributes page to make it easy to share your memories.