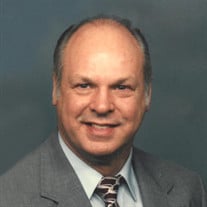 Richard Ward Proudfoot, age 85, went home to be with the Lord on October 16, 2020. Born in Akron, Ohio, he lived in Akron and Uniontown his entire life. Richard (Dick, Dickie) graduated from Springfield High School, and retired from Goodyear Tire and Rubber Company with 43 years of service. Preceded in death by his wife (dance, euchre, and bridge partner) of 38 years, Lillis M. Proudfoot (Cochran); son, Douglas Proudfoot; brothers, Paul and Robert; sister, Carol; and parents, Dorothy and Ernest Proudfoot. Survived by daughters, Vicki Proudfoot, Sandy Proudfoot-Summers (fiancé Greg); grandson, Mike Summers (Angie) and grandson, Matt Summers (Desirae); many great-grandchildren; sister-in-law, Eileen Proudfoot; and many nieces and nephews; step-sons, Chris Oravec (fiancé Laurie), Joe Oravec (Hope), Dave Oravec (Debbie), Tom Oravec (Caroline); step-daughter, Martina Oravec; along with many step grandchildren and great grandchildren. Richard’s son Doug would be talking about his fond memories of deer, rabbit and pheasant hunting with him, and now you can walk hand in hand again. Richard worked many holidays and sometimes double and triple shifts at Goodyear to provide for his family. There are so many cherished memories of camping trips and boating in the “Proudfoot canoe,” spending Christmas’ at Daytona Beach, and Sunday pot roast dinners at grandma’s house in Ellet, and so much more. No one would say Richard was a talkative person, but it was so obvious he had so much kindness and love in his heart for everyone. These last 10 years Richard had even less to say as Lewy-bodies dementia fought him for his body and mind. But, still, even as he slowly declined, he always had a smile on his face when we would visit with him. Dearest Dad…Your life was a blessing, Your memory is a treasure, You are loved beyond words, and You will be missed beyond measure. May you rest in peace. Until we meet again. Friends and family will be received Wednesday, from 5 to 7 p.m. at Hopkins Lawver Funeral Home, 3553 Northdale Street NW (one block NW of the square of 619 & Cleveland Avenue), UNIONTOWN, Ohio 44685. A graveside service will be held Saturday, 10 a.m. at Holy Cross Cemetery in Akron. (Hopkins Lawver, UNIONTOWN, 330-733-6271) www.hopkinslawver.com

Richard Ward Proudfoot, age 85, went home to be with the Lord on October 16, 2020. Born in Akron, Ohio, he lived in Akron and Uniontown his entire life. Richard (Dick, Dickie) graduated from Springfield High School, and retired from Goodyear... View Obituary & Service Information

The family of Richard Ward Proudfoot created this Life Tributes page to make it easy to share your memories.

Richard Ward Proudfoot, age 85, went home to be with the Lord...

Send flowers to the Proudfoot family.