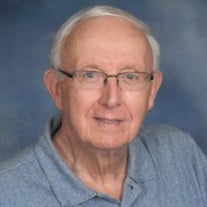 Robert “Bob” Fleming Roberts died on March 28, 2021. Born in Parkersburg, West Virginia to Robert D. and Nonga F. Roberts, Bob grew up in Pomeroy, Ohio. He graduated from Ohio University cum laude with a B.S. in chemistry in 1961. While at OU he met his life-mate, Nancy, whom he married in 1961. Bob was preceded in death by his parents and is survived by his daughters, Kathryn (Michael) Wesner, Rebecca Dymond, and Laura (Brian) Walsh; grandchildren Paul (Bernadette) Wesner, Erin Wesner, James and Laina Walsh. He leaves his brother Michael (Sharon) Roberts and their children, Michael and Diana (Daryl) Harkin. Bob worked as a research chemist for Shell Chemical in Texas. Then he worked for General Tire Research and Development. The last 29 working years were with the Goodyear Chemical Division. Bob held several patents. He was a past member of the American Chemical Society, Akron Rubber Group, and Cuyahoga Falls Jaycees. Active in his church, he served on several committees, church council, and as council president. He was a history buff and member of MAPS. Bob enjoyed making (and drinking) wine, travel, and time with friends and family. Thank you to all at Summa City Hospital who took care of him. Friends and family will be received on Friday, April 2nd at 10 AM at Advent Lutheran Church, 1516 Edison St. NW, Uniontown, OH 44685. A funeral service will immediately follow at 11 AM with Bob Cheyney officiating.

The family of Robert F. Roberts created this Life Tributes page to make it easy to share your memories.

Send flowers to the Roberts family.