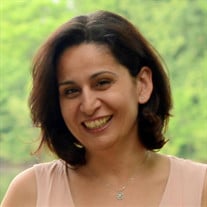 Silva Fabiyola Tütünciyan Nelson May 9, 1973 – October 21, 2019 With her family at her side, Silva passed away at home on October 21, 2019 after courageously battling lung cancer for almost four years. Silva Fabiyola Tütünciyan, age 46, was born May 9, 1973 in Istanbul, Turkey, the oldest of two daughters to Arşaluys Tütünciyan. Silva and her younger sister Lerna were raised in Istanbul by their mother and late step-father Nigogos, as well as by her grandparents, uncles, and close relatives. Silva had an early passion for English and pursued her dream of moving to England, going to university, and building a life in London. She succeeded in all aspects, moving there in her 20s, obtaining a degree from the University of Bournemouth, and building a happy and successful life in London. With close friends, she traveled Europe extensively from her base in London. After marrying Trevor in 2011 in ceremonies in both London and Istanbul, they moved to Boston, where Silva gave birth to Sophia in 2012. They temporarily moved to Alexandria, VA, where Silva gave birth to Jack in 2013. The young family relocated to Albania in 2014. Sadly, in early 2016 Silva was diagnosed with terminal lung cancer. The family returned to the U.S., where Silva underwent several years of treatment, including multiple clinical trials. Silva is survived by her family and friends, to include her devoted husband Trevor; daughter Sophia, 7; son Jack, 5; mother Arşo; sister Lerna; grandmother Yaya; uncle Aleksan (Ali) and aunt Nazeni; uncle Şinork; and several cousins, nieces, and nephews. She is also survived by a loving group of lifelong friends who can only be called family, to include Serli, Demet, Aytaç, Maral, Ebru, Güladiye, Ayçıl, and the list could go on. Silva was cherished and her smile and warmth will be missed by many around the world. Above all, Silva loved Sophia and Jack, and with every fiber of her being she strived to be the best mom. Silva’s greatest fear was leaving her children without a mother at such young ages, and she fought her cancer with all she had so she could spend as many days as possible with them. Friends and family will be received Saturday, November 2, 2019, from 1:30 to 2:30 p.m. at Hopkins Lawver Funeral Home, 3553 Northdale Street NW, Uniontown, Ohio 44685 (one block NW of the square of 619 & Cleveland Ave.), where Memorial service will follow the visitation at 2:30 p.m. with Pastor Josh Little officiating. In lieu of flowers, the family requests memorials in Silva’s name be made to support ALK positive lung cancer research via the ALK Positive community of patients, caregivers, and advocates, of which Trevor was an early and active member. www.alkpositive.org/donate (Hopkins Lawver, Uniontown, 330-733-6271) www.hopkinslawver.com

The family of Silva F. Nelson created this Life Tributes page to make it easy to share your memories.

Send flowers to the Nelson family.