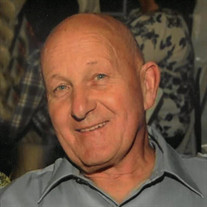 Steve Sitko, age 80, went home to be with the Lord on October 18, 2020. Born in Washington Pa., he lived in Suffield, Ohio, and graduated from Central High School. Steve was retired from Giant Eagle. His interests included camping, boating,... View Obituary & Service Information

The family of Steve R. Sitko created this Life Tributes page to make it easy to share your memories.

Steve Sitko, age 80, went home to be with the Lord on October...

Send flowers to the Sitko family.