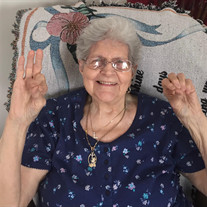 Virginia Francis Rhodes Prezioso passed away peacefully at her home on Sunday, February 27, 2022. She had recently moved to Spartanburg, South Carolina where she lived with her daughter and caregiver, Bonnie Varner. Virginia was born and raised in Akron, Ohio. She attended the Ohio School for the Deaf in Columbus. She married Ralph Prezioso Sr. in 1948 and they made their home in Sharon, Penn where they raised their 5 children. Virginia worked at the Youngstown Post Office for over 30 years. She was very involved in the Ohio Association of the Deaf’s District 9 in different roles including president and she was the chair of many different events throughout the years. After her retirement from the Post Office, she bought a home in Zephyrhills, Florida and lived there for fourteen years. Virginia was very active in the Red Hats both in Zephyrhills, Florida where she was Queen Mother and in Akron, Ohio where she was an active member. Virginia was adventurous and knew how to have a good time. She loved to travel with family and friends; such as taking a trip to Europe with her sisters, where they visited Great Britain, Belgium, Switzerland, and Italy. She went on at least eleven cruises to different places including Puerto Rico, Aruba, Alaska, and Hawaii. Some of her favorite things to do on the cruises was to go on the excursions and to learn how to make different crafts. She is preceded in death by her parents, Ethel and Luther Rhodes; sister, Mary Donahue; husband and companion, Ralph Prezioso Sr.; grandson, Aaron Morrison; and son-in-law, Thomas Varner. Left to cherish her memory are children, Bonnie Morrison Varner, Ralph Prezioso Jr., Randy (Carlene) Prezioso, Rodney (Tracey) Prezioso, and Gene (Rosemary) Prezioso; ten grandchildren, Lisa Morrison, Sean Morrison, Connie Varner, Rodney Prezioso Jr., Brian Prezioso, Lori Bourne, Lauren Maynard, Kristen Hilton, Gia Prezioso, and Nicholas Prezioso; eighteen great-grandchildren; three great-great-grandchildren; and siblings, Dorothy McKenna, Charles Rhodes, and Ronnie Rhodes. A private family viewing will be held on Monday, March 7, 2022 at Hopkins Lawver Funeral Home, 547 Canton Rd. Akron (Ellet), Ohio 44312 from 2:00 PM to 5:00 PM. Friends and family will be welcome at the same location on Tuesday, March 8, 2022 from 9:00 AM to 11:00 AM with services beginning at 11:00 AM. Burial will follow at Hillside Memorial Park in Akron, Ohio. Lunch will be served at the Holiday Inn at 898 Arlington Ridge Rd. Akron, Ohio 44312 after services are finished.

Virginia Francis Rhodes Prezioso passed away peacefully at her home on Sunday, February 27, 2022. She had recently moved to Spartanburg, South Carolina where she lived with her daughter and caregiver, Bonnie Varner. Virginia was born and raised... View Obituary & Service Information

The family of Virginia F. Prezioso created this Life Tributes page to make it easy to share your memories.

Virginia Francis Rhodes Prezioso passed away peacefully at her...

Send flowers to the Prezioso family.