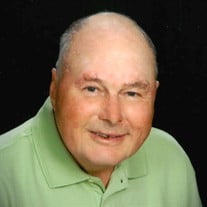 William James Droppleman, age 80, of Uniontown, went home to be with our loving Lord on February 20, 2020, at Cleveland Clinic Akron General, Akron, Ohio. William James Droppleman, “Bill”, was born in West Union, West Virginia to James P. Droppleman and Bertha Flanagan Droppleman. He attended West Union High School, W.Va., where he played multiple sports. Following that, he graduated from West Virginia University with a Bachelor of Science in Business Administration, was a member of Delta Tau Delta Fraternity, and ROTC. Next, he served as an Army Artillery Officer in Germany. With the completion of his tour of duty, he returned home to finish post graduate studies in Accounting at Niagara University, N.Y. and Marshall University, Huntington, W.Va. Ultimately, after many years as a Comptroller for B.F. Goodrich, he retired to enjoy his passions which included: hunting, fishing, gardening, playing bridge, following the stock market, and spending time with his family that cherished him. He was preceded in death by his parents; however, he will be greatly missed by his wife of 58 years, Susan Shaw Droppleman; his son, William Michael Droppleman (Julie) of Norton; his daughter, Jenny Ellen Droppleman of Uniontown; his brother, John J. Droppleman (Nancy) of West Union, W.Va.; his sister, Jo Goldstein (Stan) of Longwood, Fla.; his in-laws, William Mankins (Carolyn) of Huntington, W.Va.; and many beloved nieces and nephews. The family wishes to extend sincere thanks to all the medical professionals that have cared so tenderly for him in the past. Following cremation, a private service will be held at a later date to be attended by family at Holy Spirit Catholic Church. He will be placed at rest in Ohio Western Reserve National Cemetery. (Hopkins Lawver, AKRON, 330-733-6271) www.hopkinslawver.com

The family of William James Droppleman created this Life Tributes page to make it easy to share your memories.

Send flowers to the Droppleman family.