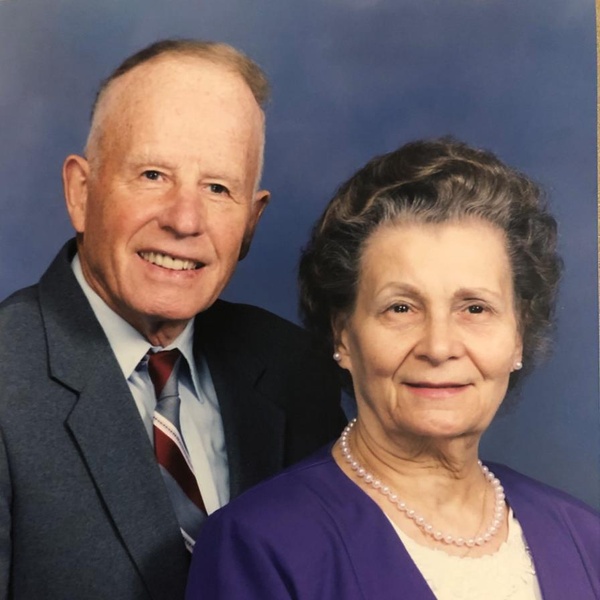 "Together Again" Andronichi “Anne” Topalu Nixon, age 100, passed away peacefully on July 15, 2021. Anne was born in a small mountain village named Gopesh in the former country of Yugoslavia (Now the Republic of North Macedonia). At the tender age of 2 ½, Anne, along with her mother, completed the long voyage to America to reunite with her father. Anne’s youth revolved around the family-owned restaurant “Terry’s Place,” where she could often be seen sitting on the fire hydrant out front. Located across from Akron University, “Terry’s Place” was a hotspot for both students and faculty alike. The perfect location and steady stream of collegiate personnel formed the beginning of Anne’s dream…the dream of being old enough to attend college herself one day. When Anne was old enough to attend school, she attended Spicer Elementary, Central High School, and Hammel Business College. During this time she met her husband, Harold. Even with their family still growing, Anne did not give up her dream for a fine education; she continued her studies at Akron University and obtained her Masters in Guidance and Counseling, a Bachelors in Comprehensive Social Studies, and an Associates in Political Science and Government. With just as much fervor that she applied to her studies, Anne championed for positive societal changes for senior citizens at all levels of government. Her loving parents sparked her concern for making sure the ones she loved and even the ones she might never meet would be treated with compassion and equality. She held many positions in local and state AARP chapters, including the AARP Area 5 Vice President. Due to her tireless dedication and solicitous nature, Anne was honored by various organizations for her merit. She was inducted into the Ohio Senior Citizens Hall of Fame (2005); honored as the “Outstanding Advocate of the Year “(1999); Inducted along with her husband into the Area Agency on the Aging 10B Hall of Fame (1995); received the “Outstanding Senior Citizen Award” (1987); and has been presented with other prestigious awards from AARP, Senior Citizens Commission of Akron, The Ohio Area Agencies on the Aging, among many others. In 1988, Anne began her representation in the Senior Intern Program in Washington DC. An appointment that was given by US Senator, John Glenn. From then until 2003, Anne held a place on the Ohio Department on Aging’s Advisory Council. In 1995, she served as a delegate at the White House Conference on Aging. Anne served as the secretary to the Board of Directors of the Area Agency on Aging, 10B, Inc. and for her church, The Annunciation Greek Orthodox Church’s parish council. Her service continued as a community representative on Summa Health Systems Akron City Hospital’s Ethics Committee. Anne was preceded in death by her loving husband, Harold. They were married for 47 years when he passed in 1995. From the beginning to the bittersweet end, they stood united in love for one another; and fought together, hand - in - hand, through every battle. Anne was never one to shy away from what was the right and true thing to do. This was a lesson she tried to instill in her children and they never lacked in inspiration towards their mother, grandmother,and great-grandmother. She is survived by her two beloved daughters, Vasi Laurence of NYC and Marcia (Thomas) Nigro of Waterford, Maine; three grandchildren, Thomas (Melissa) Nigro, Katharine (Peter) Knorr, and David Nigro; and eight cherished great-grandchildren. Family and friends will be received Tuesday, July 20th from 6 to 8 p.m. at Hopkins Lawver Funeral Home, 547 Canton Road (Route 91) Akron (Ellet), Ohio 44312. A funeral mass will be held Wednesday, July 21st at 11 a.m. at Annunciation Greek Orthodox Church, 129 S. Union St. Akron, OH 44304. Burial will follow at Rose Hill Burial Park.
To order memorial trees or send flowers to the family in memory of Andronichi "Anne" Topalu Nixon, please visit our flower store.