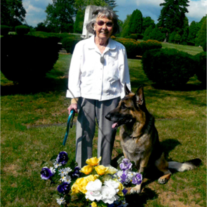 Bohncile “Bonnie” (Tate) Hower 1920 – 2018 Bonnie Hower, 98 years and six weeks, went home to be with the Lord on August 28, 2018. She died at home surrounded by her family. Born in Calhoun, Fla. on July 7, 1920, she lived in Akron most of her life, and was a member of the Akron Baptist Temple. Bonnie loved reading her Bible and volunteered at various hospitals. She enjoyed watching Dr. Phil on television. Bonnie was most giving of herself and what she and Bill worked for their whole lives. She outlived all of her regular friends and wondered where they went. She will see them again if what she always believed in comes to pass. Preceded in death by her husband, Berdette “Bill” Hower, to whom she was married for 61 years; and parents, Mary Lou Richards and John Norman Tate, Bonnie is survived by her sister, Jo; sons, Kip Hower and Terry Hower; daughter, Lynn Ward; grandchildren, Lori (Jay) Wigal, Carrie (Keith) Fouts, Troy, Todd and Tory Hower; six great-grandchildren; and two great-great-grandchildren. Family and friends will be received Saturday, from 10:30 to 11:30 a.m. at Hopkins Lawver Funeral Home, 547 Canton Road (Route 91), Akron (Ellet), Ohio 44312. A Graveside Service and burial will follow at Hillside Memorial Park. (Hopkins Lawver, AKRON, 330-733-6271) www.hopkinslawver.com
To order memorial trees or send flowers to the family in memory of Bohncile "Bonnie" (Tate) Hower, please visit our flower store.