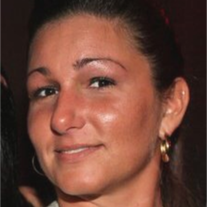 Brea Elizabeth Martin, age 40, passed away suddenly early Wednesday morning, September 4, 2019. She was born on July 4, 1979 in Akron, Ohio. Brea truly lived a life to the fullest through simple pleasures; spending time with her family, chatting with friends, and cheering on her kids at every game. Brea had an uncanny ability to put a smile on everyone’s face. She attended St. Vincent-St. Mary High School and The University of Akron. Brea is survived by her mother, Barbara; her husband, Antonio Martin Sr.; her children, Kendal, Kaleb, Trey and Antonio Jr.; uncle, Roby; aunts, Liz (Diana), Susan (Michael), Robyn (Larry); and cousins. She was preceded in death by her father, Larry R. Smith. Family, friends and others whose lives Brea touched are invited to reminisce, grieve and support each other on Monday, from 4 to 7 p.m. at Hopkins Lawver Funeral Home, 3553 Northdale Street NW, UNIONTOWN, Ohio 44685 (one block NW of the square of 619 & Cleveland Ave.), followed by a time of reflection beginning at 7 p.m. Memorial contributions may be made to Brea's family in care of the funeral home. (Hopkins Lawver, UNIONTOWN, 330-733-6271) www.hopkinslawver.com
To order memorial trees or send flowers to the family in memory of Brea Elizabeth Martin (Mullen), please visit our flower store.