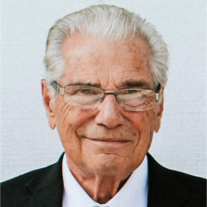 Charles “Chuck” Wade Frazier, age 81, went to his heavenly home on March 29th, 2018. Chuck was born on December 21, 1936 in Canton to the late Earl and Agnes Frazier. He married the love of his life, Marilyn Kiefaber in October 1959 at Our Savior Lutheran Church. Together they built a beautiful home in Canton where they raised three wonderful daughters who would raise their own families close by. In 2009, family and friends celebrated Chuck and Marilyn’s 50th wedding anniversary in Sugarcreek, where Chuck especially enjoyed the breakfast buffets and seeing the puppies. A graduate of McKinley High School, Chuck retired from the Timken Company as a machine operator and worked part-time for his son-in-law at Cutter Equipment Company. Over the years, Chuck and Marilyn enjoyed vacations and boating with their daughters, sons-in-law, and grandchildren. Chuck enjoyed gardening, fishing, and attending his six grandchildren’s events and performances. Charles is survived by his loving wife of 58 years, Marilyn; his daughters, Beth (Jeff) Shoemaker and Traci (Nino) Pangrazio; his six grandchildren: Chelsea and Nathaniel Shoemaker, Lauren (Adam) Karapandzich, Brittany Moore, and Olivia and Isaac Pangrazio; and son-in-law, Greg Moore. He is preceded in death by his infant brother, Paul Robert and recently his daughter, Kelleen Frazier Moore. A Memorial Service will be held at 1 p.m. on Tuesday, April 3rd, 2018 at the Hopkins Lawver Funeral Home, 3553 Northdale Street NW (one block NW of the square of 619 & Cleveland Avenue) in Uniontown, Ohio with Pastor Brian Nutt officiating. Calling hours will be held two hours prior to the Memorial Service on Tuesday. A private committal service will be held for the family at a later date. (Hopkins Lawver, UNIONTOWN, 330-733-6271) www.hopkinslawver.com
To order memorial trees or send flowers to the family in memory of Charles "Chuck" Wade Frazier, please visit our flower store.