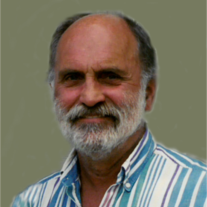 Derrill L. Larch, our loving Pop, passed away unexpectedly at home on December 26, 2019. Pop was born in Norton, Ohio on May 3, 1943, to the late Roma and Rosa (nee Reed) Larch. He was raised in Clinton, Ohio along with his 6 older sisters, and often joked about getting all of the hand-me-downs! He was a graduate of Manchester High School where he played football as a running back, earning his letters and many accolades. After high school, he attended the University of Akron, studying Sociology, but did not finish at that time. He would return in 2003 to earn his degree in Sociology and graduate in 2005 at the age of 62. He started employment at Mature Services soon after and used his degree and life experience to help others with addiction, retiring in 2017. December 10, 2019 marked his twentieth year of sobriety. We could not be more proud!! He cherished his time with his family. His quick wit, and well placed sarcasm will be missed. Preceded in death by his sisters, Donna, Delores, Diana and Darlene. He leaves behind his best friend and companion of 21 years, Cheryl Roberts; four very proud children, Tavin (Cindy), Jason ( Stephanie), Derek, and Mindy Board (Allen); sisters, Daisy and Delphia; grandchildren, Caitlin, Dayne, Monte and Jenna; and extended loved ones Hallie, Hannah, Kayla, Rocco, Presley, Abi, Chelsey and Todd Michael. Friends and family will be received Thursday from 5 to 7 p.m. at Hopkins Lawver Funeral Home, 547 Canton Road (Route 91), Akron (Ellet), Ohio 44312 .A brief memorial service and time of sharing will be held following the visitation, and beginning at 7 p.m. (Hopkins Lawver, AKRON, 330-733-6271) www.hopkinslawver.com
To order memorial trees or send flowers to the family in memory of Derrill L. Larch, please visit our flower store.