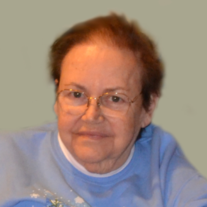 Frances May Sohl, age 84, passed away on July 11, 2018. Born on October 18, 1933, her parents who both emigrated from Belfast, Ireland at the beginning of the Great Depression raised Frances and her four brothers in North Olmsted, Ohio. As a child, Frances spent over eight months in Ireland visiting her Great Aunt Frances, whom she was named after. She graduated from North Olmsted High School, then went on to receive a Bachelor of Science degree in Nursing from Baldwin Wallace University and a Master of Education from Cleveland State University. Frances was married to George (Bill) Sohl, now deceased. She and Bill raised their three children in Bay Village, Ohio for over 40 years. They later moved to Hartville, Ohio to be closer to their family. Frances and Bill took numerous trips to Europe, the Caribbean Islands and across the United States and Canada. Frances was a proponent for higher education, especially for women, which allowed one to become independent and self-confident. She was proud of her children and grandchildren, loved being with them and celebrating their accomplishments. Frances would frequently state, “Bill and I had three children and all of them turned out to be successful adults with great partners.” She is survived by her three children, Ann Burger (David) and their children, Sarah and James; John Sohl (Janet) and their son, Evan; and Elizabeth Sohl (Clarence Wyland). Funeral Service will be Monday, July 16, 2018, 11 a.m. at Hopkins Lawver Funeral Home, 3553 Northdale Street NW, UNIONTOWN, Ohio 44685 (one block NW of the square of 619 & Cleveland Ave.) Family and friends will be received prior to the service on Monday, from 9:30 to 11 a.m. Graveside Services and burial will be held on Tuesday, 11 a.m. at Sunset Memorial Park in North Olmsted. (Hopkins Lawver, UNIONTOWN, 330-733-6271) www.hopkinslawver.com
To order memorial trees or send flowers to the family in memory of Frances May Sohl, please visit our flower store.