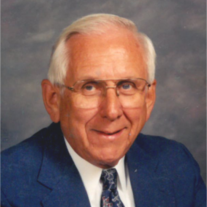 George C. Snyder, age 86, went home to be with the Lord on January 21, 2018. Born in Lorain, Ohio and graduated from Brownhelm High School, he went on to earn an electrical engineering degree from Ohio Northern University. After a 43 year career, George retired from Goodyear Aerospace, later known as Lockheed Martin. George was a veteran of the U.S. Army, a member of Uniontown United Methodist Church for 55 years and was very active in the Uniontown Lions Club. He was instrumental in acquiring the funding for and establishing the All Veterans Memorial located on the grounds of the Uniontown Community Park which he was still very active in maintaining. George was part of the Masonic Lodge and Scottish Rite of Akron. He enjoyed traveling, woodworking, reading, and spending quality time with family and friends. Preceded in death by his parents, Paul and Norma Snyder; and son, Paul C. Snyder; he is survived by his loving wife of 55 years, Phyllis; son, Mark (Dee); daughter-in-law, Kelle; and grandchildren, Stephanie, Ryan, Justin, Harrison, and Hadley. Friends and family will be received Friday, from 4 to 8 p.m. at Hopkins Lawver Funeral Home, 3553 Northdale Street NW, UNIONTOWN, Ohio 44685 (one block NW of the square of 619 & Cleveland Ave.) Funeral service will be held Saturday, 11 a.m. at Uniontown United Methodist Church, 13370 Cleveland Avenue NW, Uniontown, Ohio 44685 with Rev. James P. Nolte officiating. Burial will be held at Ridge Hill Memorial Park in Lorain at the family’s convenience. The family suggests memorials be made to Uniontown United Methodist Church, or Uniontown Lions Club, P.O. Box 427, Uniontown, OH 44685. (Hopkins Lawver, UNIONTOWN, 330-733-6271) www.hopkinslawver.com
To order memorial trees or send flowers to the family in memory of George C. Snyder, please visit our flower store.