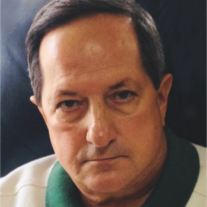 Gerald R. Nardell, age 71, passed away on October 5, 2018. Born in Akron on January 26, 1947, he lived in the area all of his life. Gerald graduated from Hoban High School and was employed with Goodyear Tire & Rubber for 38 years. He was a lifelong Cleveland sports fan, and enjoyed spending time with his grandkids. Preceded in death by his parents, John A. and Jessie Nardella, he is survived by his significant, caring and loving other of ten years, Michalann Curlutu; son, Christopher Nardell; daughter, Jennifer Nardell-May (Tommy); grandchildren, Collin and Gavin Nardell and Gianna May; brother, Jim Nardella (Marge); sister, Judy (Steve) Haverkos; former wife and friend of 24 years, Judy K. Nardell; and many nieces and nephews. Friends and family will be received Thursday, from 5 to 8 p.m. at Hopkins Lawver Funeral Home, 3553 Northdale Street NW, UNIONTOWN, Ohio 44685 (one block NW of the square of 619 & Cleveland Ave.) Additional visitation will be Friday, 9:30 a.m. at the funeral home, followed by a Funeral Service at 10:30 a.m. (Hopkins Lawver, UNIONTOWN, 330-733-6271) www.hopkinslawver.com
To order memorial trees or send flowers to the family in memory of Gerald R. Nardell, please visit our flower store.