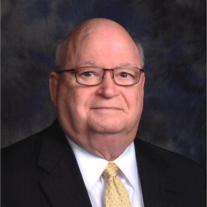 James D. Gray, 79, of Springfield Township (Summit Co.) passed away on March 18, 2019. James was born on May 28, 1939 in Cowen, West Virginia to Charles and Gladys Gray. The family moved to Akron in 1951, and he later attended East High School and graduated from Garfield High School in 1957. James earned a Bachelor of Science in Education in 1966 and a Master of Education in 1973, both from Kent State University. James spent most of his educational career with the Springfield Local School District, serving as a teacher, counselor, and in administrative positions, including as Superintendent from 1980 until his first retirement in 1992. James shortly returned to the educational field, serving as Principal of Ayden-Grifton High School in Pitt County, North Carolina, Principal of Oberlin High School and Superintendent of Oberlin City Schools, and finally as Superintendent of Strongsville City Schools, after which he retired again in 2008. In addition to being a strong advocate for students and the public school system, James was an active member of his community, having served in several civic and political organizations, and even running on multiple occasions as a candidate for elected office. James also was a faithful member of Westminster Presbyterian Church and previously Firestone Park Presbyterian Church, where he served as an elder in both congregations. Above all, James was a dedicated family man, who enjoyed raising his four sons, and he devoted much of his time in retirement toward being with his family. James was preceded in death by his wife of 44 years, Deloris; his twin brother, Charles David; and brothers, Richard Rohf, Howard Kent, and Richard Holt. He is survived by his son, James (Mallory) and grandchildren Gabrielle, Samuel, and William of Uniontown, Ohio; his son, Daniel (Marissa) and grandchildren, Jacob and Emily of Hadley, Massachusetts; his son, Joseph (Merideth) and grandchildren, Caitlin and Joseph of Wadsworth, Ohio; his son, Nicholas (Sabrina) and grandson, Thomas of Ashburn, Virginia; and his siblings, Martha Ann Guckelberger of Akron and Roger William Gray of Valley City. The family will receive visitors at the Hopkins Lawver UNIONTOWN Funeral Home, 3553 Northdale Street NW, on Thursday, March 21, 2019 from 2 to 4 p.m. and from 6 to 8 p.m. A Funeral service will be held at Westminster Presbyterian Church, 1250 West Exchange Street, Akron, on Friday, March 22, 2019 at 11 a.m. Interment will follow the funeral service at Hillside Memorial Park, 1025 Canton Road, Akron. Memorial contributions may be made to Kent State University Foundation, P.O. Box 5190, Kent, OH 44242, or online at givetokent.org. Please indicate #11800 College of Education Developmental Fund. (Hopkins Lawver, UNIONTOWN, 330-733-6271) www.hopkinslawver.com
To order memorial trees or send flowers to the family in memory of James D. Gray, please visit our flower store.