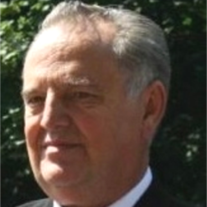 James Jarrell, age 78, went home to be with the Lord on October 10, 2019. Born in Akron, he lived most of his life in the Suffield area and graduated from Suffield High School, Class of 1961. Jim retired from Goodyear where he spent most of his career at the Stow Mold Plant. He served on the Suffield Volunteer Fire Department and attended Community Baptist Temple. Jim enjoyed watching Western movies, fishing, hunting and woodworking. He lived a life of high morals, where honesty and integrity were paramount. Above all, he was a dedicated father. Preceded in death by his parents; and his brother, Mike Jarrell, Jim is survived by his wife of 43 years, Mary Lou; daughters, Nancy Jarrell, Cindy (Larry) Buck, Vicki (Charles) Gaug and Jenni (Peter) Kneuertz; grandchildren, Jessica, Stephan, Amanda, Tiffani, Alex, Amelie, Elise, Caleb and Cortni; great-grandchildren, Ava, Alijah, Dominic and Peyton; and siblings, Becky (Carl) Wright, Gary (Julie) Lancaster and Clara (Denny) Hanni. Jim’s family would like to extend a special thanks to the caregivers from Crossroads Hospice. Friends and family will be received Sunday, October 13, 2019, from 2 to 4 p.m. at Hopkins Lawver Funeral Home, 547 Canton Road (Route 91), Akron (Ellet), Ohio 44312. Funeral service will follow the visitation Sunday at 4 p.m. with Pastor Mark O’Donnell officiating. Memorials may be made to Project Ed Bear at: www.projectedbear/donate, which supports children with cancer at area hospitals. (Hopkins Lawver, AKRON, 330-733-6271) www.hopkinslawver.com
To order memorial trees or send flowers to the family in memory of James Jarrell, please visit our flower store.