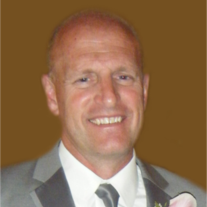 Jay M. Rummell, age 52, passed away at home, surrounded by his loving family on February 11, 2019 after a brave two-year battle with cancer. Born in Akron on September 17, 1966, he graduated from Ellet High School in 1984 where he still holds a school track record. Jay proudly served in the United States Marine Corps from 1984-1988 during which time he visited several countries and sailed around the world on the USS Okinawa. Following his military service, Jay worked for the US Postal Service for 29 years. He was a very hard worker and made many friends at the post office and along his route in Ellet. Jay was a member of The Chapel in Green. He loved the Lord and used his illness as a way to share his testimony, touching many hearts. Jay was preceded in death by his mother, Mary. He will be forever loved and missed by his wife of 32 years, Mary Ann, and his children, Erin (Ryan), Jessica and Matthew. He also leaves behind his father, Paul; brother, Dan (Dee); sister, Carolyn; mother-in-law, Carol Jursik; father-in-law, Mel Strbich; sister-in-law, Janet Catalano; brother-in-law, Steve (Connie) Strbich; and many nieces, nephews, coworkers and friends. Jay was an excellent bowler, having fifteen ‘300’ games. He made many friends at the lanes and really enjoyed bowling with his dad and brother with whom he held a friendly competition for the most ‘300’ games. He also liked watching college football, the Browns and the Indians. Jay loved the ocean and traveled most years to North Carolina. His favorite vacation was a 25th wedding anniversary trip to California where he got to return to Camp Pendleton and see the Pacific Ocean again. The thing Jay most loved was spending time with his family. He loved watching his children grow up, coaching their teams, attending their games, concerts, and school events and loved reminiscing about those times during his illness. The family would like to thank the many doctors and nurses at Cleveland Clinic, Akron General, and Hillcrest Hospital for their excellent care of Jay for these past two years. He also received compassionate care from the staff at Crossroads Hospice in his final days. Also, a special thank you to the many family and friends who provided prayers, meals and support. All these people are truly angels on Earth. Friends and family will be received Friday, from 5 to 8 p.m. at Hopkins Lawver Funeral Home, 547 Canton Road (Route 91), Akron (Ellet), Ohio 44312. Funeral service will be held Saturday, 11 a.m., with visitation beginning at 10 a.m., at The Chapel in Green, 1800 Raber Road, Uniontown, Ohio 44685 with Pastor Dale Saylor officiating. Burial with military honors provided by Mogadore VFW Post 8487 will follow at Hillside Memorial Park. In lieu of flowers, the family suggests contributions to the American Cancer Society in Jay’s memory. I have fought the good fight, I have finished the race, I have kept the faith. 2 Timothy 4:7 (Hopkins Lawver, AKRON, 330-733-6271) www.hopkinslawver.com
To order memorial trees or send flowers to the family in memory of Jay M. Rummell, please visit our flower store.