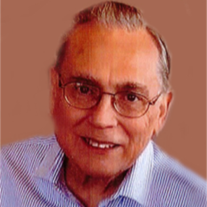 Jeffrey William Saracsan, age 75, died on November 9, 2019 in Albuquerque, New Mexico. Born in Cleveland, Ohio on November 26, 1943 to his parents, William Saracsan and Ann Saracsan (Anna Orosz), he graduated from Holgate High School in Defiance, Ohio and went on to receive a Bachelor of Science in Chemistry from Bowling Green State University in Toledo, Ohio and a Master of Science in Polymer Chemistry from the University of Akron. Jeffrey was married to Martha Sue Szaraz on June 6, 1970. They would have celebrated 50 years together this coming June. Mr. Saracsan retired from Dow Automotive after 18 years of service, having been previously employed by Ashland Chemical for 11 years and the Goodyear Tire and Rubber Company for 18 years. He holds a patent for polyurethane laminate that was used by NASA during their Apollo 14 mission to the moon. Jeffrey was a member of the American Chemical Society for over 50 years, and was an active member at Faith Lutheran Church in Albuquerque, where he served as an Ambassador. Jeffrey was a devoted husband, father, and grandfather who loved volunteering at his church, playing with his grandchildren, and creating movies to commemorate special family events. He will be forever loved and dearly missed by his wife, daughters, and grandchildren. Preceded in death by his father, William Saracsan, and mother, Ann Saracsan, he is survived by his wife, Martha Sue Saracsan of Albuquerque, N.M.; daughter, Michelle Hamilton (Brad) and grandsons, Gavin and Liam Hamilton of Queen Creek, Ariz.; and daughter, Jennifer Ludington and granddaughter, Zoey Ludington of Albuquerque, N.M. Visitation will be held Friday, November 22, 2019, from 6 to 8 p.m. at Hopkins Lawver Funeral Home, 547 Canton Road (Route 91), Akron (Ellet), Ohio. A funeral procession will form at the funeral home at 10 a.m. on Saturday, November 23, 2019 before going to Hillside Memorial Park, where funeral services will be held in the cemetery chapel at 10:30 a.m. Burial will immediately follow the service at the cemetery.
To order memorial trees or send flowers to the family in memory of Jeffrey William Saracsan, please visit our flower store.