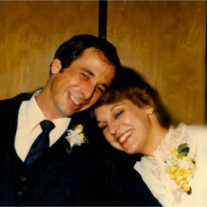 "Together Again" Jeffrey A. Smith, age 65, was reunited with his wife on May 26, 2018. Born in Akron, he lived in the Akron area most of his life and graduated from Coventry High School in 1970. Jeff served in the U.S. Army during the Viet Nam War and retired from the United States Postal Service. He was a proud member of the NRA and enjoyed bowling, baseball and spending time at the beach. His greatest joy was being with his family. Preceded in death by his wife, Cindy; parents, Jeff Smith and Audrey Keller; step-dad, Jacob Keller; and sister, Barbara Smith, Jeff is survived by his children, Julianne (Dustin Sr.) Sabolek, Michael (Erika) Smith, Jerry (Gina) Smith, Theresa Smith and Karen Smith; nine grandchildren, one great-grandchild; and sisters, Jean (John) Kurtz and Robin Smith. Friends and family will be received Saturday, from 9 to 10 a.m. at Hopkins Lawver Funeral Home, 3553 Northdale Street NW, UNIONTOWN, Ohio 44685 (one block NW of the square of 619 & Cleveland Ave.) Procession will then depart from the funeral home for a Funeral Mass Saturday, 11 a.m. at St. Joseph Catholic Church, 2643 Waterloo Road, Mogadore, Ohio 44260 with Father Thomas Acker, S.J. presiding. Burial will follow at St. Joseph Cemetery. In lieu of flowers, memorials may be made to the Alzheimer’s Association or Disabled American Veterans. (Hopkins Lawver, UNIONTOWN, 330-733-6271) www.hopkinslawver.com
To order memorial trees or send flowers to the family in memory of Jeffrey A. Smith, please visit our flower store.