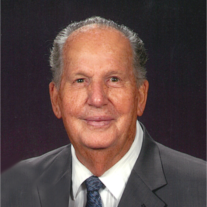 Lorin E. “Pops” Wagner, age 89, passed away at home on February 16, 2018 surrounded by his family. A life resident of Akron, he graduated from East High School and served as a Gunner in the U.S. Navy on the U.S.S. Uhlmann. Mr. Wagner retired from Goodyear Tire & Rubber Company after 21 years of service. He was a member of First United Methodist Church of Akron for 63 years, where he cooked for the Free Lunch program for 14 years. Lorin enjoyed his ship’s reunions and gathering with classmates, the “Over the Hill Gang” and countless friends. His family meant everything to him, especially the grandchildren, great-grandchildren and many who adopted him as their own. Lorin was preceded in death by his parents, Harry and Beulah; brothers, Harry, Howard and Bob; and sister, Marilyn Stevens. He is survived by his wife of 63 years, Shirley; daughters, Kim (Don) Taylor, Becky (John) Uber and Lorine (Sam) Napoli; nine grandchildren; 13 great-grandchildren; brother, Gerald; and sister, Joan (Bill) Tyson. Lorin’s family would like to extend special thanks to Jean, Mary, Sonya and Linda for their loving care. Family and friends will be received Monday, from 4:30 to 7:30 p.m. at Hopkins Lawver Funeral Home, 547 Canton Road (Route 91), Akron (Ellet), Ohio 44312. Funeral Service will be held Tuesday at 1:30 p.m., with visitation starting at 1 p.m., at First United Methodist Church of Akron, 263 E. Mill Street, Akron, Ohio 44308 with Pastor Howard Pippin officiating. Burial will follow at Hillside Memorial Park, where Mogadore VFW Post 8487 will conduct military honors. The family suggests memorials to the Free Lunch Program at First United Methodist Church at the address above. (Hopkins Lawver, AKRON, 330-733-6271) www.hopkinslawver.com
To order memorial trees or send flowers to the family in memory of Lorin E. Wagner, please visit our flower store.