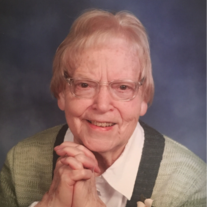 Martha Jane Hull Sneyd died in East Cleveland on December 6, 2018, in the McGregor retirement community she had moved to three years ago to be nearer her daughter. She was exactly a month shy of her 90th birthday. Martha had been a resident of Mogadore for close to 60 years and belonged to the Mogadore United Methodist Church for nearly all of that time. She was a devoted and active member of the church and counted her church friends as part of her extended family. Family was central to Martha’s life. She was married for 27 years to her beloved Paul before he died much too soon. But her marriage remained the defining event of her life and for her it endured for 64 years. Together, they raised three children who were as devoted to her as she was to them. And then she had the great joy of grandchildren who filled her with immense pride. Martha was born in Canton on Jan. 6, 1929, the oldest of Mary (McLain) and Earl Hull’s nine children. She was raised in Salineville and Mechanicstown, graduating from Carrollton High School in 1947. She went on to Riggs LaMar Beauty School and worked as a cosmetologist until she had a family. After Paul’s death, she worked for seven years at Colonial Gardens Nursing Home in Akron. Besides family and church, Martha enjoyed many different kinds of crafts, including embroidery, painting and coloring. She collected friends and maintained her many relationships through phone calls, cards and letters, which always contained newspaper clippings or pages from her colorful desk calendars or a joke she’d read. Martha is survived by her daughter, Mary Lou Sneyd Gillispie and her husband Mark, and their two children, Samuel Leeson and Martha Hanna; son, Frank Sneyd and his wife Debbie, and their two children, Victoria Hana and Paul Ervin; and son, Ross and his husband, Warren Hathaway. She is also survived by brother, Merle Hull of Mechanicstown; sister, Marvis Eshler and her husband, David of Canal Winchester; and sister, Connie Orr also of Canal Winchester; sisters-in-law, Judy Hull of Lisbon, Emma Hull of East Liverpool; brother-in-law, Mark Cargill of Minerva; many nieces, nephews and cousins. She was predeceased by her husband, Paul; parents, Mary and Earl Hull; brothers, Howard and James Hull; sisters, Jean and Joann Hull and Linda Cargill. A service celebrating her life will be held at 2 p.m. on Wednesday, Dec. 12, 2018 at Mogadore United Methodist Church, 3828 Mogadore Road, Mogadore, OH 44260 with Rev. Eric Kluth officiating. The family will receive visitors at the church prior to the service, from 12 to 2 p.m. Memorial contributions in Martha’s name may be made to the church. (Hopkins Lawver, Mogadore, 330-733-6271) www.hopkinslawver.com
To order memorial trees or send flowers to the family in memory of Martha Jane Hull Sneyd, please visit our flower store.