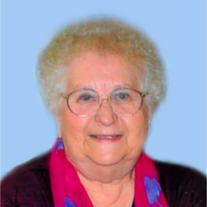 Mary Alice Rauber 1922-2018 Mary Alice (Booher) Rauber ended her earthly journey Wednesday, April 25, 2018. She received her new heavenly body in the presence of her Savior and was reunited with her husband, son, parents, brother and all who have gone before. Mary Alice was born July 7, 1922 in Canton, Ohio to L.H. and Jennie (DeVolld) Booher. She spent her childhood in Canton and attended Canton City Schools. She was a proud 1940 graduate of Canton McKinley Senior High School. She attended Canton Business College and worked at Hercules and the YMCA during World War II. Mary Alice met her future husband, Louis Reese Rauber, while on a camping trip to Rice Lake, Canada. They married on December 20, 1941, a few weeks after the attacks on Pearl Harbor. Louis was then deployed to the South Pacific as Mary Alice awaited him on the homefront. Upon his return they settled in Mogadore, Ohio where they raised their family. Mary Alice continued as secretary at Mogadore Christian Church and Akron Christian Grade School. Mary Alice became involved with Child Evangelism Fellowship and held Good News Clubs for children in her home. She also held women’s bible studies for neighborhoods where she lived. She learned to play the violin at an early age and continued until her death. Her joy was to play with her great-granddaughter Madelynn. Mary Alice sang in many church choirs and also participated in the Goodyear Theatre. She was raised at First Presbyterian Church in Canton, attended Mogadore Christian Church, Arlington Memorial Baptist Church and was one of the founding members of the Chapel in Marlboro. In addition to her parents, she was preceded in death by her husband, Louis; son Louis Karl; infant great-granddaughter, Joy Lynn Storey; and brother, Frank. She is survived by children, Mary Lou (Dick) Westfall of Louisville, Tom (Ruthie) Rauber of Mogadore and Carolyn (Jim) Burns of Mogadore. She is also survived by siblings, Ruth Adams of Pearland, Texas, Vivian Schneider of Cherry Hill, Colorado, and Jerry (Bea) Booher of Danica Beach, Florida. Carrying on her legacy are grandchildren, Wendy (Steve) Hobson, Chelsea (Rick) Teeple, Aaron (Marie) Rauber, David (Melinda) Westfall, Amy (Brent) Cope, Lindy (Matt) Carson and Matt (Becky) Westfall. Also, great-grandchildren, Madelynn, Nick, Trent, Joshua, Tanner, Elijah, Brooklynn, Nate, Emily, Hunter, Mason, Victoria, Micah, Mia, Parker, Caleb and Lucas. She is also survived by many nieces, nephews and friends. The family would like to give a special thank you to Melissa Schrock who helped care for Mary Alice and assisting Mary Lou and Tom and allowing Mary Alice to remain in her home. Also, the entire staff at Pebble Creek Nursing and Rehab Facility in Green for their excellent care, and to the Testa, Yoder and Sasser families for being such helpful neighbors. Funeral Service will be Saturday, April 28, 2018 at 11 a.m., with visitation from 10 to 11 a.m., at Arlington Memorial Baptist Church, 2330 East Market Street, Akron, Ohio 44312 with Pastors Dave Bogue, Donald Davies and Joel Cochran officiating. Burial will follow at Greenwood Cemetery in Mogadore. In lieu of flowers, memorial gifts may be sent to: Child Evangelism Fellowship, 310 Orchard Avenue, Cuyahoga Falls, Ohio 44224. Mary Alice was also known for her ‘Letters to the Editor’ and she wanted to close her obituary with: ‘To God be the Glory, it all went by much too fast!’ (Hopkins Lawver, AKRON, 330-733-6271) www.hopkinslawver.com
To order memorial trees or send flowers to the family in memory of Mary Alice Rauber, please visit our flower store.