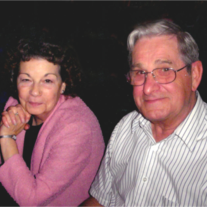 "TOGETHER AGAIN" Mary T. Wieland, age 85, went home to be with the Lord on June 8, 2019. Mary was born in Akron, and was a lifetime area resident. She was a homemaker. Preceded in death by her husband of 66 years, Lee; her parents, Louis and Teresa Falcone; sister, Lucy Miller; and brothers, Leonard and Louis Falcone, Mary is survived by her daughter, Karen (Paul) Liska; two grandchildren; six great-grandchildren; sister, Rose (Terry) Wright; sister-in-law, Mary Jane Falcone; and many nieces, nephews, other relatives and friends. Friends and family will be received Wednesday, from 5 to 7 p.m. at Hopkins Lawver Funeral Home, 547 Canton Road (Route 91), Akron (Ellet), Ohio 44312. Funeral service will follow the visitation at 7 p.m. on Wednesday at the funeral home. Private burial will be held at Hillside Memorial Park. (Hopkins Lawver, AKRON, 330-733-6271) www.hopkinslawver.com
To order memorial trees or send flowers to the family in memory of Mary T. Wieland, please visit our flower store.