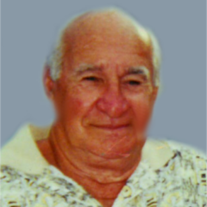 Norman L. “Norm” Calhoun, age 90, passed away peacefully surrounded by family on March 9, 2019. He was born in Peninsula, Ohio on June 15, 1928, to Ted and Arlene Calhoun. The family moved to the Portage Lakes area and that is where Norm spent his formative years. Norm was a successful open wheeled circle track automobile racer in the 1950’s and 1960’s competing locally at Barberton Speedway, Canton Motor Speedway and Midvale Speedway as well as racing in Pennsylvania and West Virginia. He was also very proud of his service in the United States Marine Corps serving his tour of duty in China as a young man. He was preceded in death by his parents; wife, Dory; brothers, Gordon and Gene; sister, Dawn Weese; and daughter, Norma (Toot) Reedy. Norm is survived by his wife of nearly 44 years, Patricia; children, Rory, Rick (Sherry), David (Denise) Delillo, Kim (Tim) Robinson, Andi Frank (Gary Belles), Christina Melhouse and Robin Griffin; 13 grandchildren; and many great grandchildren. Norm and Pat recently returned to Ohio, currently living in Louisville, in January of 2018 after spending 20+ years of living in Florida. Norm enjoyed time spent with family and friends. He was a man of few words but when he spoke the words were true and meaningful. We will miss this great man, a husband, father, grandfather, great grandfather and friend to all of us. At his request, cremation has taken place. A celebration of live gathering will be held Saturday, March 16, from 3 to 6 p.m., at Chenoweth Golf Course and Banquet Hall, 3087 Chenoweth Road, Akron, Ohio 44312. (Hopkins Lawver, AKRON, 330-733-6271) www.hopkinslawver.com
To order memorial trees or send flowers to the family in memory of Norman L. "Norm" Calhoun, please visit our flower store.