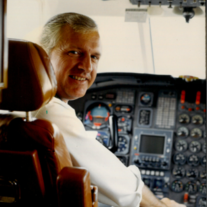 Robert B. Showalter, age 83, went home to be with the Lord on March 1, 2018. Born in Rose Hill, Kansas, Robert graduated from Rose Hill High School. He later moved to Akron, Ohio, where he lived most of his life. Robert retired from the Edward J. DeBartolo Corp. where he worked as a corporate pilot who would frequently transport members of the San Francisco 49ers during the late 80’s and early 90’s. He was a member of the AOPA (Aircraft Owners and Pilot Association) and the Quiet Birdman Society. Robert enjoyed watching the Akron Rubber Ducks and the Cleveland Indians games. Preceded in death by his wife, Gerda; parents, Roy and Wilma Showalter; son-in-law, Ralph Drushal; he is survived by daughters, Dianna Drushal and Janelle Showalter; grandchildren, Benjamin, Joseph and Hanna Drushal; sister, Jerene McCune; and many nieces, nephews and friends. Friends and family will be received prior to the service on Wednesday, from 4 to 5 p.m., at Hopkins Lawver Funeral Home, 3553 Northdale Street NW, UNIONTOWN, Ohio 44685 (one block NW of the square of 619 & Cleveland Ave.) Funeral service will immediately follow Wednesday at 5 p.m. Private burial at Greenlawn Cemetery. (Hopkins Lawver, UNIONTOWN, 330-733-6271) www.hopkinslawver.com
To order memorial trees or send flowers to the family in memory of Robert B. Showalter, please visit our flower store.