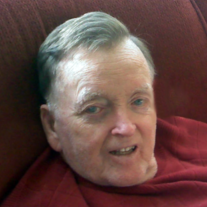 Robert L. Weakland, age 89, went home to be with the Lord on April 2, 2018. Born in Akron, Rob was one of 13 children born to the late George and Mary Weakland. He graduated from East High School and served in the U.S. Army. Mr. Weakland retired from Goodyear Tire & Rubber in 1991 after 46 years of service. Rob always enjoyed Country Western music and played guitar and harmonica much of his life. He enjoyed flea markets, swap meets and most of all spending time with his family. Rob was widely known as the "Bike Man" and not only fixed bikes for area kids, but taught them to change a tire and lower a seat themselves. Besides his parents, Rob was preceded in death by brothers, Carl, George, Heim and Jim; and sisters Emily, Louise and Margaret. He is survived by his wife of 56 years, Alma; sons, David Duncan of Kansas City, Missouri, Glenn Weakland of N. Kingstown, Rhode Island, Chris, Gary and Danny Weakland, all of Akron, Ohio; daughters, Donna (Skip) Holler and Bonny (Johnnie) Marcum of Columbus, Ohio, and Linda (Rob) Vanek of Akron; 12 grandchildren; 18 great-grandchildren; brother, Tom Weakland; sisters, Arlene Ciolli, Mary Ann Oliver, Geraldine Barron and Evelyn Lowe; and many nieces and nephews who loved their Uncle Rob. Family and friends will be received Saturday, from 11 a.m. to 1 p.m. at Hopkins Lawver Funeral Home, 547 Canton Road (Route 91), Akron (Ellet), Ohio 44312. Funeral Service will follow the visitation at 1 p.m. Saturday at the funeral home with Pastor Scott Carr officiating. Military honors will be conducted at the conclusion of the service. Private burial will take place at Tallmadge Cemetery at the convenience of the family. (Hopkins Lawver, AKRON, 330-733-6271) www.hopkinslawver.com
To order memorial trees or send flowers to the family in memory of Robert L. Weakland, please visit our flower store.