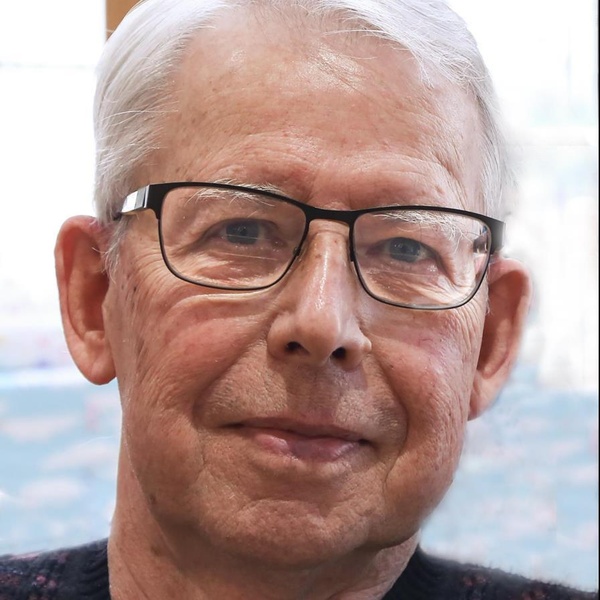 Roger H. Schindler, 84, passed away at home from complications of MS. He was surrounded by his family and next to his wife of 59 years, Gloria. Roger was born in Cleveland, OH on March 4, 1937 to Wilbert and Martha Schindler. He grew up on the shores of Muzzy Lake in Rootstown, OH, graduating from Rootstown High School in 1955. He attended Western Reserve University, his first year of college Roger was diagnosed with Multiple Sclerosis. The diagnosis was his life would only last a few years. Upon hearing the news, Roger returned to college and finished his Biology degree in 1960 at Kent State University. Roger met Gloria Mungillo at church camp and they married September 15, 1962. Together they moved to Columbus where he attended Pharmacy School at The Ohio State University, graduating in 1963. Roger worked for numerous pharmacies over the years, retiring from Kmart Corporation in 1999. Roger was a hardworking, determined family man who lived with MS for 65 years. A man of deep thoughts and few words he lived with a strong faith in God and was deeply committed to his church family, Suffield United Church of Christ. Following retirement, he enjoyed time with his grandchildren and great-grandchildren, and watching the Browns, Indians and Cavs. Survivors left to cherish his memory are his wife, Gloria, and four children Melissa (Ilya) Paolucci of Akron, OH, Wendy (Wayne) Schindler-Chasney of Milan, OH, Stacey (Mark) Swindell of Uniontown, OH, Jason (Carrie) Schindler of Rootstown, OH; eleven grandchildren, Seth, Caleb (Marie), Olivia (Jon), Camille, Isaac, Meredith, Nicholas, Isabel, Brenna, Paige, and Derek; two great-grandchildren, Noah and Eli; sisters, Evelyn Bryan (Brimfield, OH), Karen (Ken) Siegel (Sun City, AZ), Irene Schindler (Glendale, AZ); brother-in-law, Roger Mungillo (Youngstown, AZ); numerous nephews, nieces, and cousins; his high school classmates and his beloved church family. Roger was preceded in death by his parents, in-laws, one sister, a niece and great-nephews, along with all the physicians who said he would not live to be 30. Roger enjoyed a good joke and relished life and we encourage others to do the same. The family expresses sincere gratitude to those who helped care for him and the family in his final days. A private family service will be held with a memorial celebration on Saturday, February 26th at 11 a.m. at Suffield United Church of Christ, 1115 OH-43, Mogadore, OH 44260. Arrangements are being handled by Hopkins Lawver Funeral Home. In lieu of flowers, contributions can be given to The National Multiple Sclerosis Society, Suffield United Church of Christ, and Crossroads Hospice.
To order memorial trees or send flowers to the family in memory of Roger H. Schindler, please visit our flower store.