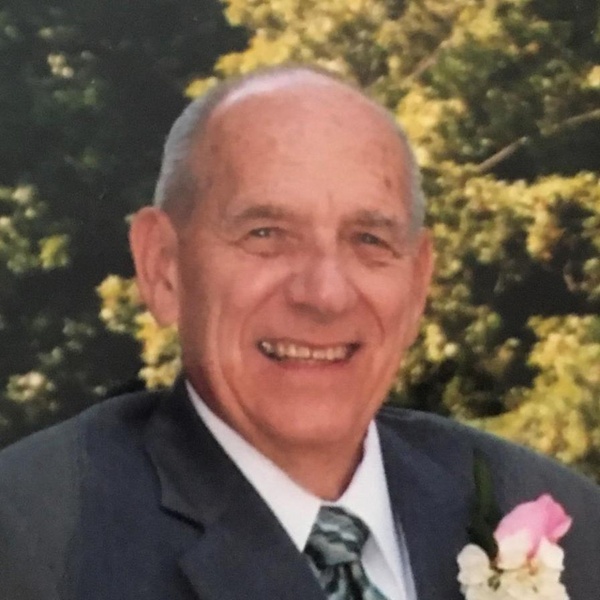 Roland Dale (Ron/Ronnie) Swank, 92, God’s faithful and devoted servant, passed from this earth on December 30, 2021. A life-long resident of Akron, he was preceded in death by his father and mother, George Washington and Margaret Madeline Swank as well as his beloved brother and WWII army veteran and D-Day survivor, Merlin D. Swank. Born on July 7, 1929, at Akron City Hospital, Roland shared the same birthday with his father and his oldest great granddaughter, Ava Meili. As coincidence or perhaps fate would have it, his license plate read A777M for many years. Following graduation from Ellet High School in 1947, he set off for California to seek fame and fortune before returning to Akron to attend Akron University for one year. Fate would again intervene in 1950, when he and a friend went downtown to the employment bureau to apply for a job. The friend got in the line for a car wash company and told Roland that since he was good at organizing things, he should get in the line marked Kroger. And so began a 38-year career as one of the most successful Kroger managers in northeast Ohio. Early in his time with Kroger, he met the love of his life, Norma Lorraine Adams. Married on September 12, 1954, they embarked on a 67-year journey grounded in unwavering faith, trust, mutual admiration, support and love for one another. Whether it was hauling three kids in the back of a Chevy station wagon on three-week summer camping trips to Hatteras island, the Great Smoky Mountains, and Kentucky Lake State Park or playing nine holes of golf as the sun was going down, they demonstrated by example how to live life to the fullest each and every day. Half way back on the center aisle in the pulpit side pew at Oak Hill United Presbyterian Church was his home every Sunday morning. He served as Sunday School superintendent and was a church elder. For 38 consecutive years, he attended Sunday School every Sunday including the Sunday of the great snow storm of 1950 and while traveling on those annual summer family camping trips. A kidney stone attack while working in Ravenna ended the streak but not his devotion to the Church and the people it served. In addition to his wife, Mr. Swank is survived by his son Alan (Terry) Swank, granddaughter Lindsey (Mark) Meili and great granddaughters Ava Belle, Emma Lynn and Olivia Grace Meili, grandson Ryan Swank (Courtney Wiener) and great granddaughter Adeline Swank, son David Swank (Clare Paquelet), granddaughter Katherine Swank (Brandon Turner) and great granddaughter Beatrix Mae Turner, grandson Andrew Swank, and daughter Alison (Steve) Thompson and granddaughters Anne Thompson (Adam Parker) and Sarah (Charlie) Seidell. The family would like to thank the staff at Rockynol Independent Living Apartments and the care team of Kelly, Christie, Amy, and Joseph with Summa Hospice for their tender and loving care. Due to Covid considerations, a private service and burial will take place on January 4th with a Celebration of Life at a later date. In lieu of flowers, memorial contributions can be made to Open M, 941 Princeton Street, Akron, OH 44311 in recognition of Roland’s 30 plus years of volunteer work with the organization’s Christian ministry programs or to Oak Hill United Presbyterian Church, 2406 Ardwell Avenue, Akron, OH 44312, where he was a devoted member for almost 85 years.
To order memorial trees or send flowers to the family in memory of Roland "Ronnie" D. Swank, please visit our flower store.