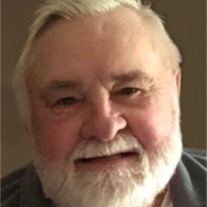 Ronald O. Donner, age 73, went home to be with the Lord on January 4, 2020. Born in Barberton, he was raised in Manchester, graduated from Manchester High School in 1964 and graduated from Columbia College. Ron served for 20 years in the U.S. Army and retired a Master Sergeant. A current resident of Hinckley, he retired from UPS and owned ROD Lawncare in retirement. Ron was a member of Wayfarer Masonic Lodge No. 789 F&AM where he served as Past Master, a Past Sovereign Prince of AASR Valley of Akron, a Past Patron of Billow Chapter, a member of Medina Chapter O.E.S., a member of Amaranth, and a member of the York Rite Bodies of Akron. He was a lifetime member of the VFW in Beloit, Ohio and a member of the DAV in Medina. Ron was a member of Eastgate Alliance Church where he served as head trustee and on the governing board. He was preceded in death by his parents, Orin and Dorothy Donner; and sister, Patricia Ochsenbein. Friends and family will be received Thursday, from 6:30 to 8:30 p.m. at Hopkins Lawver Funeral Home, 547 Canton Road (Route 91), Akron (Ellet), Ohio 44312, where an Eastern Star Service will be held at 8 p.m., followed by a Masonic Service at 8:15 p.m. Funeral service will be held Friday, 10 a.m. at Eastgate Alliance Church, 350 Hilbish Avenue, Akron, Ohio 44312 with Rev. Harold R. Duncan officiating. Burial will follow at Greenlawn Memorial Park in Akron. The family suggests memorials to Eastgate Alliance Church, or Eastern Star Billow Chapter or Medina Chapter. (Hopkins Lawver, AKRON, 330-733-6271) www.hopkinslawver.com
To order memorial trees or send flowers to the family in memory of Ronald O. Donner, please visit our flower store.