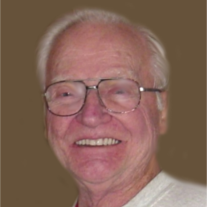 Russell Rymer, age 95, passed away Sunday, March 10, 2019, due to declining health. Russ was born in Clarksburg, West Virginia on June 30, 1923 to Russell and Lena Rymer. He later moved to Akron and attended Garfield High School. Russ was a veteran of the U.S. Army where he served during World War II in Italy. Russ retired from Goodyear after 45 years of service. Preceded in death by his parents; and granddaughter, Gretchen Hillis; Russ is survived by his loving wife of 77 years, Rosemary; daughters, Nancy and Terrie Rymer; son, Ray Rymer; grandchildren, Melissa Rymer, Bruce Hillis, Danielle Rymer, Rusty Hillis; nine great grandchildren; 3 great-great grandchildren; and brother, Jim (Suzanne) Rymer. Funeral service will be held Wednesday, 1 p.m., at Hopkins Lawver Funeral Home, 547 Canton Road (Route 91), Akron (Ellet), Ohio 44312, with Pastor Jonathon Carey officiating. Friends and family will be received Wednesday, one hour prior to the service, from 12 to 1 p.m., at the funeral home. Private burial at Hillside Memorial Park. In lieu of flowers, the family suggests memorials be made to a charity of your choice in memory of Russ.
To order memorial trees or send flowers to the family in memory of Russell Rymer, please visit our flower store.