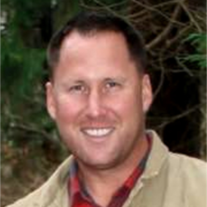 Shane M. Nalepa, age 44 of Hartville, died unexpectedly as a result of an underlying heart condition, which led to a heart attack on October 1, 2019. He was born on January 16, 1975 in Steubenville, Ohio, the son of John and Lois “Poochie” Holub. He attended Steubenville City Schools, where Shane was a multi-sport athlete, excelling in football, basketball and baseball. One of his many memorable baseball accomplishments was making it to the State Finals with his brother, Ryan as his teammate. He was the quarterback for Big Red Football and led his team to many victories. Shane went on to further his football career at Malone University, where he started the football program and played quarterback for four years, but more importantly, Shane created bonds with his teammates to last a lifetime. Shane was inducted into the Malone University Athletics Hall of Fame in 2019. Shane was an avid outdoorsman. He could always be found taking his sons golfing, fishing, dirt bike riding, and four-wheeling. He was up for any adventure and was passionate about creating memories with his sons. Shane was dedicated to coaching any sport his kids wanted to play, whether it was baseball, hockey, football or basketball. Shane was the first to volunteer to work with the kids in the community. He loved every minute of coaching as it meant he got to spend even more time with his boys. Left to cherish his memory are his wife of 12 years, Karla; sons, Gavin and Beau; parents, John and Lois “Poochie” Holub; brother, Ryan Nalepa; sister, Kristin Babela; nephew, Rossi; uncle, Larry (Cindy) Davin; aunts, Holly (Anthony) Pate and Robin (Vic) Linsky; grandma, Dolores Werkin; in-laws, John and Karen Skipper; many other loving family members; many golf buddies, football brothers, Lake Youth Baseball family, and the CAHA Hockey family. While Shane had many accomplishments, his most important role was as father to Gavin and Beau, and husband to Karla. He will be missed beyond words. Family and friends will be received (TODAY) Friday, October 4, 2019, from 4 to 7 p.m., and Saturday, October 5, 2019, from 10 to 11 a.m. at Evermore Community Church, 1470 Smith Kramer Street NE, Hartville, OH 44632, where Funeral service will be held Saturday at 11 a.m. In lieu of flowers, contributions may be made to a college fund for Shane’s boys at: https://gofundme.com/f/NalepaBoysCollegeFund (Hopkins Lawver, Uniontown, 330-733-6271) www.hopkinslawver.com
To order memorial trees or send flowers to the family in memory of Shane M. Nalepa, please visit our flower store.