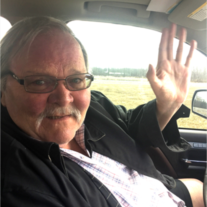 SUFFIELD - Steven J. Smith, age 68, passed away peacefully on October 15, 2018 surrounded by his family. Born in Akron, he was a lifelong resident of Suffield and a member of St. Joseph Catholic Church. Steve attended Hoban High School and was a graduate of the University of Akron. Steve was the former president of H.M. Miller Construction AND MOVED ON TO FORM 1127 CONSTRUCTION, INC. WITH HIS FOUR SONS. Steve spent all of his life dedicated to his passion for the construction industry and to his family. He was a member of Congress Lake Country Club and Hill ‘N Dale Hunt Club, where he especially enjoyed the annual Thanksgiving Day Hunt with his family and friends. Steve was preceded in death by the love of his life, his wife Janet; parents, JC “Clell” and Bernie; brothers, David and Michael; grandparents, Harry and Stella Miller and Clell and Ethel Smith; and his beloved collie, Arthur. He is survived by his fiancée, Marijane Schuck; and his best friends, his four sons, Steven (Tangela), Jeffrey (Traci), Joseph and Nicholas. Steve is also survived by his grandchildren, Jeffrey Jr. (Allie), Joshua, Alex (Taylor), Nate (Nicole), Taylor, Joey, Alex, Megan, and Shelton; great-grandchildren, Leigha, Alexis, Toby, Arlyn and Oliver; brothers, Tom, Pat and John; and many friends. Family and friends will be received Monday, from 11 a.m. to 1 p.m. at St. Joseph Catholic Church, 2643 Waterloo Road, Mogadore, Ohio 44260. A private Funeral Mass and burial will be held for his immediate family. The family suggests memorials to the Suffield and Mogadore Fire Departments, the Portage County Sheriff’s Department, or the Almost Home Collie Rescue, 4672 Aberdeen Ave, Dublin, OH 43016. (Hopkins Lawver, AKRON, 330-733-6271) www.hopkinslawver.com
To order memorial trees or send flowers to the family in memory of Steven J. Smith, please visit our flower store.