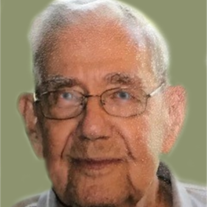 Wilfred Charles (Bud) Clayton passed away on December 3, 2018 in Indianapolis, Indiana. He was born August 21, 1929 in Akron, Ohio to the late Sadie Agnes and Charles Clayton. Bud graduated from Springfield High School in 1947. After graduation, he entered the Army in 1951 and served in the Third Armored Division. He married Dorothy Ann Weiss on October 25, 1952; she preceded him in death on March 24, 2010. They were active members of Millheim Baptist Church in Akron, Ohio, where he and Dorothy dedicated their time, efforts and energy for several years as youth leaders, influencing the direction of many young lives. After a rewarding career of 32 years, Bud retired from B.F. Goodrich. After retirement, he and Dorothy moved to Mountain Home, Arkansas and enjoyed the lifestyle and friendships they developed there. They moved to Madison, Indiana in 2007 to be closer to their families. After Dorothy’s death, Bud moved to Greenwood, Indiana, and later relocated to Fishers, Indiana. He lived an active life at The Reserve at Hamilton Trace and, while there, he enjoyed participating in a variety of interesting activities. One of his most enjoyable activities was mentoring young children through a cooperative program between The Reserve and a local elementary school. He developed many meaningful friendships with the staff and residents. Bud will be lovingly remembered by his many nieces and nephews. He and Dorothy developed a strong and important bond with each one as they participated in their lives. He will also be remembered and cherished by his brothers-in law and sisters-in-law and many friends. Bud was preceded in death by his wife, parents, brothers, Michael and Donald Clayton; sister, Edna Owens; and brother-in-law, Guy Owens. Funeral services will be held Saturday, December 8, 2018 at 11 a.m. at Hopkins Lawver Funeral Home, 547 Canton Road (Route 91), Akron (Ellet), Ohio 44312 with his nephew, Reverend Ronald Owens officiating. There will be a viewing/visitation on Friday evening (December 7) from 6 to 8 p.m. Burial will be at Hillside Memorial Park. (Hopkins Lawver, AKRON, 330-733-6271) www.hopkinslawver.com
To order memorial trees or send flowers to the family in memory of Wilfred Charles (Bud) Clayton, please visit our flower store.