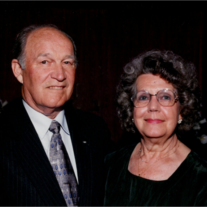 "Together Again" William “Bill” George Hill William George Hill went home to be with the Lord November 18, 2019, at age 92. Born in Barbour County, West Virginia, he was the son of the late Bernard Hill and Virgie (Triplett) Hill. Bill attended Belington High School until enlisting in the United States Navy on January 18, 1945 and received an honorable discharge on July 20, 1946. On July 1, 1950 he married Betty Jo Bennett, the love of his life who preceded him in death August 5, 2016 after 66 years of marriage. He truly missed her over these last few years, a void that could not be overcome. He lived in Akron and retired from Goodyear Tire after 35 years of continuous service. He was a member of the Northern Masonic Jurisdiction, Grand Lodge of Free & Accepted Masons Star Lodge 187, Tadmor Shriners, the American Legion Post 209, and Veterans of Foreign Wars Post 410. Bill was preceded in death by his sister, Betty (Gross) and brother, Eugene; and is survived by sisters, Eloise (Board) and Patty (Carpenter); brothers, Herman, Howard and Walter; sister-in-law, Lois Caplinger; and 30 nephews and nieces who were special. Bill was a wonderful man that left an impression on everyone that met him, a keen sense of humor that was as contagious as his smile. Genuinely concerned about others. He will be greatly missed by all of us who truly loved him. Bill’s family would like to express their thanks to the staff of Summa Hospice for their special loving care. Calling hours for friends and family will be held at Hopkins Lawver Funeral Home, 547 Canton Road, Akron, Ohio 44312 on Sunday, from 2 to 4 p.m., followed by a funeral service at 4 p.m. with Pastor Jodi Hill officiating. In lieu of flowers, friends are encouraged to contribute to St. Jude’s Hospital. (Hopkins Lawver, Akron, 330-733-6271) www.hopkinslawver.com
To order memorial trees or send flowers to the family in memory of William "Bill" George Hill, please visit our flower store.