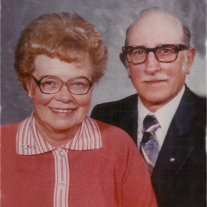 "Together Again" William L. Hoffman, age 97, reunited with his wife Louise April 15, 2018. Born and raised in North Akron, Bill lived in the Ellet area most of his life. He graduated from North High School and served in the US Navy during WWII. Bill retired as a foreman from General Tire after more than 40 years of service. He was a member of the Star Lodge #187 F&AM making him a 67 year mason and was a 65 year member of the Yusef Khan Grotto. Bill especially enjoyed photography, fishing, boating and traveling with his wife. Preceded in death by his wife of 56 years, Louise; parents, Clayton and Reta; siblings, Clyde and Elenora Hoffman and Annamay Dodds; nephews, Clyde Hoffman, Jr., Billy Dodds, Ken, Larry, Jim Hinchee and Jack Wolf; he is survived by his sister, Mellanee Hoffman Lord; nieces and nephews, Michele Kline, Heather Conley, Paula Wright, Elizabeth Dodds, Gayle Shankel, Eric Hoffman, Marie Underwood, Bud Wolf and Arnetta Bicksler; many great nieces, nephews and lifelong friends from the Grotto. Family and friends will be received at Hopkins Lawver Funeral Home, 547 Canton Road (Route 91), Akron (Ellet), Ohio 44312, Saturday, from 1 to 3 p.m. A masonic service will be conducted by the Yusef Khan Grotto at 3 p.m. followed by military rites, which will be conducted by Mogadore VFW Post #8487. Private burial at Greensburg Cemetery. The family suggests memorial donations be made to a charity of your choice. (Hopkins Lawver, AKRON, 330-733-6271) www.hopkinslawver.com
To order memorial trees or send flowers to the family in memory of William L. Hoffman, please visit our flower store.