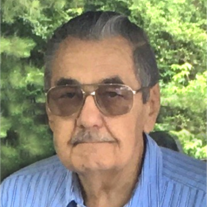 Mr. William R. Ritter, age 77, of Cedartown, Ga. passed away on Tuesday, July 31, 2018 unexpectedly at his residence. He was born on January 2, 1941, in Akron, Ohio. He was the son of the late William and Amelia Galko Ritter of Ohio. William, or “Bill” as he was called, graduated from Green High School in Akron, Ohio in 1959 and went on to study at Kent State University while on a machinist apprenticeship with Goodyear Tire and Rubber in Akron. He loved sports, namely baseball, and enjoyed being a pitcher for the American Legion in the local area. Bill later transferred to Rockmart, Georgia in 1971 to advance his career with Goodyear Aerospace Company (now Meggitt Polymers and Composites). Bill retired as the manager of Health, Safety, and Environmental with the company around 2010 and contracted for a bit afterwards. He was quite proud of his tenure with the company. Bill enjoyed golfing, travel, gardening and the outdoors. Mr. Ritter is survived by his loving wife, Bonnie Jones Ritter; daughters and sons-in-law, Cindy and Terry Rann and Lisa and Bryon Arnold; sons and daughters-in-law, William and Kimberly Ritter and Robert and Minna Ritter; grandchildren, Steven, Kevin, Kristen, Arron, Chris, Nate, Tony, Haley and William; two great-granddaughters; sister-in-law, Nina Ritter and nephew, Don Ritter. Mr. Ritter was preceded in death by his parents and brother, Don Ritter. Family and friends will be received Monday, August 6, 2018, from 6 to 8 p.m. at Hopkins Lawver Funeral Home, 547 Canton Road (Route 91), Akron (Ellet), Ohio 44312. Funeral Service will be held at 12 noon on Tuesday, August 7, 2018 at the funeral home. Burial will follow at East Liberty Cemetery in Green. (Hopkins Lawver, AKRON, 330-733-6271) www.hopkinslawver.com
To order memorial trees or send flowers to the family in memory of William R. Ritter, please visit our flower store.