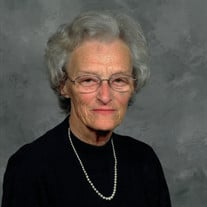 Eleanor Seiff passed away peacefully on April 13, 2022, at the young age of 91. She was born October 3, 1930 to Dr. Albert M. Clifford & Ruth Dilly Clifford. She graduated from Stow High School in 1948 and Ohio Wesleyan University in 1952, where she was the valedictorian of her class. During this period, she was a member of Alpha Delta Pi Sorority and Phi Beta Kappa honorary. She was fortunate to receive a 1 year scholarship at Marburg University in Germany, which she often spoke of her experiences and adventures. Upon returning from Germany, she was employed at Battelle Institute in Columbus, Ohio as a German translator for 6 years. She married Marvin Seiff in 1956, and had two sons, Harold and William. After the death of her husband in 1969, she returned to work at Employee Benefit Management Corp. in Dublin, Ohio. She worked at EBMC until her retirement in 1996 and moved from Columbus to Canton, Ohio to be closer to her family. She was preceded in death by her husband, Marvin A. Seiff; parents Dr. Albert M. and Ruth Clifford; sisters Mary Jane Renick and Amy Kuemmerling; and brother Charles P. Clifford. She is survived by sons Harold Seiff (Susan), William Seiff (Nancy), grandchildren Aubrey Sawyer (Zachary), Cassie Seiff (Tomas), Elli Seiff, Kyle Seiff, great granddaughter Sienna, nieces and nephews Julie Barnett, Susan Archual and Mark Renick (Kim). She was a member of Grace United Methodist Church in North Canton since her return to Canton in 1996. She enjoyed attending auctions and tag sales and especially eating out in Amish country. Some of her many collections were old skeleton keys, copper items, wooden butter molds and pats, pictures of barns, and small leather coin purses, just to name a few. She loved spending vacations traveling to Colorado to visit her sons. She was a very intelligent and independent mom, sister, aunt, grandma, great grandma and friend, who will be greatly missed by everyone. Friend and family will be received Friday, April 22nd, from 4 to 6 pm at Hopkins Lawver Funeral Home, 3553 Northdale St. NW, Uniontown, Ohio 44685. A celebration of Life Service will be held Saturday, April 23rd at 11:00 am at Grace United Methodist Church, 1720 Schneider Street NW, North Canton, Ohio 44720, Rev. Jared Williams officiating. Friends and family will be received one hour prior to the service from 10:00 – 11:00 am. A private family burial will take place at Hillside Cemetery on Randolph, Ohio. In lieu of flowers, the family suggests memorial donations to be made to Grace United Methodist Church or the American Heart Association, P.O. Box 78851, Phoenix, AZ. 85062-8851. The family would like to recognize and thank Elaine Patterson, who selfishly cared for Eleanor the last years of her life. Her dedication and compassion for Eleanor was greatly appreciated and will never be forgotten.

Eleanor Seiff passed away peacefully on April 13, 2022, at the young age of 91. She was born October 3, 1930 to Dr. Albert M. Clifford & Ruth Dilly Clifford. She graduated from Stow High School in 1948 and Ohio Wesleyan University in 1952,... View Obituary & Service Information

The family of Eleanor J. Seiff created this Life Tributes page to make it easy to share your memories.

Send flowers to the Seiff family.