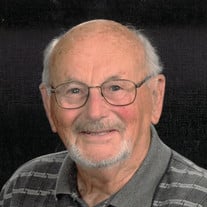 William H. Pressler, 90, loving husband, father, grandfather, and great-grandfather passed away Tuesday, March 22, 2022. Bill devoted his life to helping others, serving his country through his military service, his community through his fire department service, and his fellow man through Habitat for Humanity. Bill was born on April 4, 1931 in Uniontown, Ohio to the late Henry and Ruth (Kreighbaum) Pressler and lived in the Uniontown area for the majority of his life. Along with his parents, Bill is preceded in death by his brother Charles and his daughter-in-law Beth. He is survived by his beloved wife of 70 years, Julia (Heckman); sons Andrew (Jill) and Stephen (Julie); daughter Paula (Martin) Clark; grandchildren Christopher, Kathy, Sarah, Merlin, Pamela, Rich, Ben, Amanda, Julius, Scott, David, and Katie; great-grandchildren Luke, Ava, Mya, Avery, and Quinn; and countless other loving family members and friends. After serving in the Army from 1951 to 1953, Bill returned to Uniontown and went to work at his father’s lawn and garden business while also beginning his long career at the Uniontown Post Office. He also worked at Uniontown Electric and served as a member of the Uniontown Fire Department for 30 years, including a position as chief from 1970 to 1974. After retiring from the Uniontown Post Office in 1993, he dedicated many years to volunteering with Habitat for Humanity while continuing to serve the Lake Township community at large. Bill also enjoyed woodworking, horticulture, and spending time with his family. To know Bill Pressler was to love him. He never met a stranger who did not immediately become a friend. He will be remembered for his kind heart, sharp sense of humor, and deep devotion to his family and community. He embraced life with vigor and a twinkle in his eye, both of which remained with him to the end. Family and Friends will be welcomed to help celebrate Bill on March 25, 2022 at Hopkins Lawver Funeral Home at 3553 Northdale St. NW Uniontown, Ohio 44685 from 4:00 pm to 7 pm. A Last Alarm ceremony will be conducted at 6:45 pm. Funeral service will be at 11:00 am on Saturday, March 26, 2022 at the same location with an hour of visitation preceding at 10:00 am. In lieu of flowers, donations can be made to Grace United Church of Christ (13275 Cleveland Avenue, Uniontown, OH 44685).

William H. Pressler, 90, loving husband, father, grandfather, and great-grandfather passed away Tuesday, March 22, 2022. Bill devoted his life to helping others, serving his country through his military service, his community through his fire... View Obituary & Service Information

The family of William H. Pressler created this Life Tributes page to make it easy to share your memories.

Send flowers to the Pressler family.