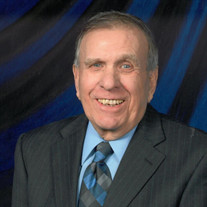 Ralph Paul Wise, 86, passed away quietly following a tough battle with kidney and heart problems. Ralph was born May 2, 1936 in Brimfield, Ohio moving to Suffield as a child. Following graduation from Suffield School in 1954, he attended trade school in Akron for his Apprenticeship and received his certificate of qualification as a Journeyman Carpenter. He proudly resided in Suffield, in the house he built in preparation for his marriage to his school sweetheart Nancy, in June 1956. His first construction job was with Christenson Construction of Kent but then he went on to build custom homes for many years together with his father Paul and brother Rich under the name Pauladale Construction. Following his father’s retirement, he continued as a self-employed contractor. He also served as a proud member of the United States Marine Corps. Ralph was a man of many talents and passions (hunting, collecting, sports) who volunteered many hours to the Suffield Historical Society. He was a rock of a man who loved his family deeply - loved his profession - loved his church and community. He will forever be in the hearts of those lives he touched and his humor, kindness and generosity will never be forgotten. He is preceded in death by his parents, Paul and Dale Wise. He is survived by his wife of 66 years, Nancy (Robison) Wise; daughters, Jackie (Russ) Romocean, Belinda (Ron) Brillouet, Wendy (Andy) Hanzel; grandchildren, Samantha Hanzel, Jack Romocean, Benjamin Hanzel, and Ralph Brillouet. He leaves behind his brothers, Richard (Betty) Wise, Curt (Jackie) Wise and sister Sharen Johnson and many nieces and nephews and cousins. The family welcomes friends to calling hours Friday, June 24th from 4-7 p.m. at Hopkins Lawver Uniontown Funeral Home, 3553 Northdale St. NW. Funeral services will be Saturday, June 25th at 11 a.m. at the Suffield United Church of Christ, 1115 State Route 43, with Pastor Karin Wright officiating. Final resting place will be Hillside Memorial Park Mausoleum. Memorial donations can be made to the Suffield United Church of Christ or the Suffield Fire Department. Fond memories and expressions of sympathies can be shared on the Hopkins website Tribute page. www.hopkinslawver.com

Ralph Paul Wise, 86, passed away quietly following a tough battle with kidney and heart problems. Ralph was born May 2, 1936 in Brimfield, Ohio moving to Suffield as a child. Following graduation from Suffield School in 1954, he attended trade... View Obituary & Service Information

The family of Ralph Paul Wise created this Life Tributes page to make it easy to share your memories.

Send flowers to the Wise family.